It's been 13 years since the release of the Disney/Pixar hit Finding Nemo, and filmmaker Andrew Stanton has opted to make a spin-off instead of a direct sequel, shifting the perspective to recount the life story of the forgetful blue tang. Because it centres on a personal quest, it's a very different style of movie, which makes some of the action feel rather contrived. But the characters are still vivid and likeable, and it's packed with meaningful themes. 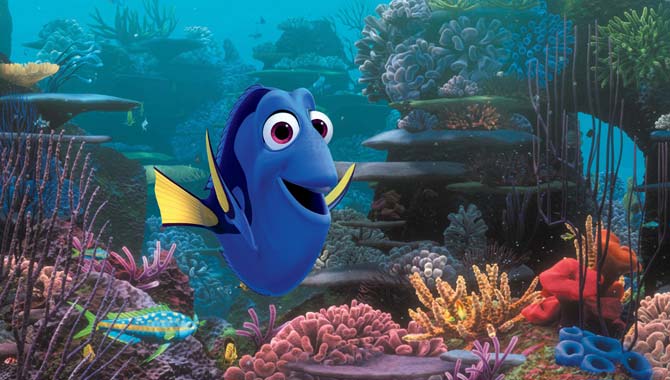 The film opens with young Dory (voiced by Ellen Degeneres) being taught by her parents (Diane Keaton and Eugene Levy) how to cope with her short-term memory problem. But she still gets lost. Then years later, after her adventure teaming up with Marlin (Albert Brooks) to help find his son Nemo (Hayden Rolence), she has a brief spark of memory and decides to find her family. Accompanied by Marlin and Nemo, Dory crosses the ocean to a California marine sanctuary, where they get separated. Dory gets help from cranky seven-tentacled Octopus Hank (Ed O'Neill), the perky whale shark Destiny (Kaitlin Olson) and a befuddled beluga whale (Ty Burrell). Meanwhile, Marlin and Nemo meet a pair of laddish sea lions (Idris Elba and Dominic West).

The underwater animation is gorgeous, drenched in layers of colour and texture that come to life in 3D. It looks rather less interesting out of water, which is oddly where a lot of the action takes place, as our fishy heroes need to continually find convenient cups of water to hop between. This makes several of the action sequences so ludicrous that they're not terribly exciting, but the characters are likeable enough to hold the audience. Anchored by DeGeneres' wonderfully riffing performance, the gifted voice actors create a range of memorable characters (Hank steals the show), even though the film's choppy structure leaves their personal journeys feeling rather simplistic.

Essentially this is a series of wacky set-pieces rather than a properly constructed plot. Along the way, Dory gets suspiciously less forgetful,which both enables the story and offers some warm resonance about the value of loved ones and the importance of perseverance. More interesting are subtle comments about assembled families and the challenges of overcoming adversity, most notably personal disability. Thankfully, these are present without too much sentimentality, and the script's constant barrage of hilarious dialogue and witty sight-gags keeps viewers so entertained that by the end they'll be hoping that this isn't the last we've seen of our undersea friends.

Watch the trailer for 'Finding Dory':