Filmmaker Stephen La Riviere goes out of his way to fill this documentary with the cheeky dry humour of the people who changed television and movies with groundbreaking puppet series like Thunderbirds. Maverick producer Gerry Anderson and his crew provide plenty of wry commentary, while an amazing range of clips makes us want to revisit all of the old programmes, including some we'd never heard of. 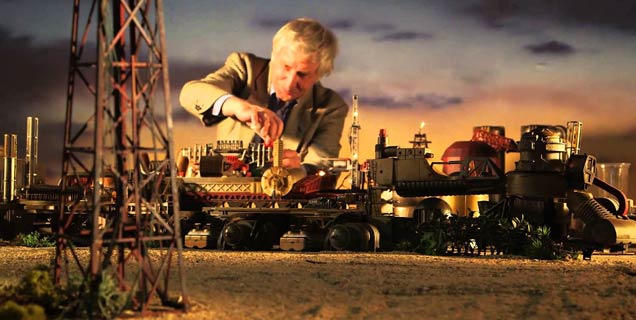 In the mid-1950s, Anderson and cameraman Arthur Provis formed AP Films to produce the TV series The Adventures of Twizzle (1957) using marionette puppets in increasingly inventive ways. Over the next few years, they developed the Supermarionation process to add even more movement, progressing from a Western series (1960's Four Feather Falls) into sci-fi (Supercar, Fireball XL5 and Stingray). Their next series in 1964 was Thunderbirds, which broke ground as a one-hour children's programme with plotlines more suited to the movies than TV. And even if two Thunderbirds movies flopped at the box office, Anderson continued to refine his puppet-based work with Captain Scarlet and Joe 90 before moving into live action in the late 1960s.

The documentary is framed with scenes of Thunderbirds' Lady Penelope, Parker and Brains discussing the Supermarionation phenomenon, intercut with interviews with voice actors, puppeteers and crew members who recount hilarious anecdotes about their years working in warehouses around Slough. They also talk about specific challenges of making TV shows like this, including how they entertained themselves by working risque innuendo into the shows, knowing it would go right over the kids' heads. Their candour is hugely enjoyable, as they share private jokes and raucous backstage stories, all while reuniting to explore their old working environments in the company of Gerry's son Jamie.

La Riviere punctuates each comment with the perfect clip from the various shows, offering another punchline to the joke. It's a clever approach to documentary filmmaking that will delight fans and draw newcomers into the grip of a style of programme-making that has changed the way films and TV shows are made today. For example, Anderson pioneered the idea of videotaping the action as it was being filmed, so he could immediately see if the shot worked (this is used universally now). He also took inspiration from the space race and the Cold War to bring political awareness into his programming, which has made shows like Thunderbirds timeless classics despite the fact that only 12 episodes and two feature films were made. But the real secret was Gerry and his wife Sylvia's unbounded imagination, and the crew's willingness to put whatever they dreamed up on screen to be enjoyed by generations to follow.