With honesty and sensitivity, this Israeli drama takes us into an unfamiliar subcuture, letting us experience aspects of life in an Orthodox Jewish community that we've probably never even imagined before. It's a strong story that's perhaps more fascinating than it is involving, although the bigger issues linger in the mind afterwards. 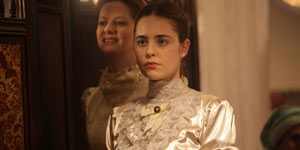 At the centre is Shira (Yaron), an 18-year-old who is just starting to get excited about her upcoming marriage. Her parents Rivka and Aharon (Sheleg and Sharir) have found her a suitable young man, but just before they meet Shira's heavily pregnant sister (Raz) dies suddenly, leaving her infant son to be raised by her widowed husband Yochay (Klein). After months of grieving, Yochay realises that he needs to find a new wife to help him, which perhaps may mean moving abroad. But Rivka won't think of losing access to her grandson, and suggests that Shira marry him instead. The problem is that Shira has no idea how she really feels about any of this.

Yes, Shira is the "void" in the title, a young woman who has never had to make a decision about who she is or what she wants in life. She has merely imagined meeting a nice boy and discovering married life together with him, so the idea of marrying Yochay throws her off balance only because he's already experienced at being a husband. Yaron plays Shira with just the right delicacy, as a young woman who tries to do the right thing and loses herself in the process. Others in the cast are a bit more melodramatic, especially in scenes that push the film's ideas about the intense pressures of this subculture.

But these details are deeply interesting, as we begin to understand the subtle interaction involved in negotiating a marriage. Every conversation is a minefield, especially with the wide variety of characters swirling around. And watching all of them interact sometimes makes us feel like an outsider peering in where we don't belong. These people are grappling with a deep grief while looking for their future happiness, which gives the movie a blast of honesty we rarely see on-screen.