Until the special effects take over in the final act, this is an unusually gritty, grounded superhero thriller, with characters who are so believable that the wacky science almost seems to make sense. This is Marvel's very first franchise, and the filmmakers are unable to resist the pressure to indulge in an overblown finale, and the digital mayhem they give into is oddly unexciting. So as an origin story, this film is more involving than most, but the superhero action itself feels rather limp.

It opens as an exploration of the school friendship between the misunderstood genius Reed (Miles Teller) and junkyard bully Ben (Jamie Bell), whose teleportation science experiment gets them in trouble. But Dr Storm (Reg R. Cathey) sees that their work solves a problem he has encountered in his own experiments, so he brings Reed to New York to join his well-funded, high-tech team. Working with Victor (Toby Kebbell) and Storm's children Sue and Johnny (Kate Mara and Michael B. Jordan), Reed builds a full-size teleporter that succeeds in crossing over to another dimension. And Ben joins the crew for an illicit first voyage that goes spectacularly wrong, leaving Victor on the other side, while Reed, Ben, Sue and Johnny emerge with superpowers caused by altered DNA. The big boss (Tim Blake Nelson) immediately starts training them for military action, but Reed remains determined to make things right.

A strong cast helps all of this play out with remarkable introspection, letting each character develop an organic back-story that brings them together as an uneasy team. The inter-relationships are complex and engaging, veering from rivalry to camaraderie. Teller anchors the film with a layered performance as a smart, troubled guy who struggles to maintain friendships as he focusses on his work. Mara and Johnson add some feisty attitude, but it's Bell and Kebbell who provide the spark of personality that makes this crew so engaging. Then both of them become animated characters (Bell as The Thing and Kebbell as Dr Doom) without even a hint of the actors visible underneath. And the movie never quite recovers its momentum.

What follows is a series of effects-based action sequences in very dull settings: the grey government lab and the utterly boring primordial parallel dimension. By failing to imagine something a bit more visually interesting, Chronicle director Josh Trank seems to let the film out of his sure grip, so these fascinating young people become rather uninteresting digital effects in a series of predictable climactic scenes. At least a final coda hints that the franchise could be rescued if it gets back to its character-based roots. 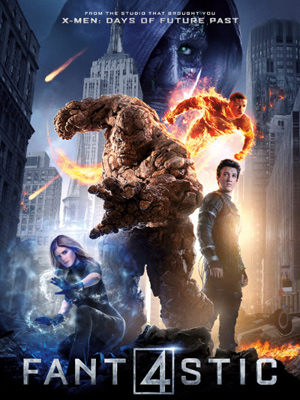