Everybody Wants Some!! Review

Richard Linklater loosely follows on from two of his most acclaimed films with this lively university comedy set in 1980. It's billed as a "spiritual sequel" to his high school classic Dazed and Confused, which was set in the late 1970s. And it also represents an exploration of the next stage in the life of the central character from Boyhood. But even without those connections, the film is a fresh, funny, involving look at how young people react to that first flush of freedom. 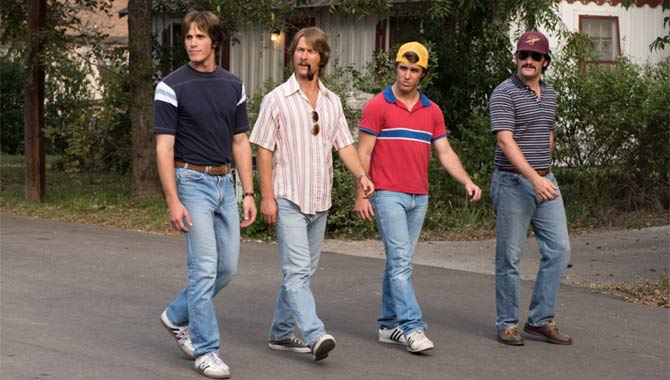 It opens as Jake (Glee's Blake Jenner) arrives at his Texas university three days before classes start. He moves into a house with the rest of the baseball team, who immediately start tormenting him as the newbie. The alpha male is the swaggering star player McReynolds (Tyler Hoechlin), usually accompanied by his good-time sidekick Finn (Glen Powell). Over this raucous weekend, Jake navigates the rules of the house, including pranks, macho posturing, initiation rites, excessive alcohol and even a baseball practice session. There are also, of course, a series of colourful parties. And along the way he makes a connection with sexy theatre student Beverly (Zoey Deutch).

The film is packed with memorable characters, and the charming Jake is a terrific entry point for the audience. Jenner plays him as a smart, nice guy who isn't afraid to stand up to both the chucklehead jocks and the idiotic party boys. All of these guys are hilariously entertaining as they jostle for position in the house. The standout is Powell's talkative Finn, who is smarter than he looks. And Wyatt Russell has terrific presence as a woolly stoner with a secret. It's a lot of fun to watch the interaction between these guys, who are all in their late teens or early 20s, flexing their newfound independence by obsessing about drinking, drugs and sex.

Linklater also has a great time recreating 1980 in all its glory, with an ace collection of songs on the soundtrack and a parade of witty costumes as these guys move between rock n roll, disco and country music-themed parties. There isn't much need of a plot here, aside from Jake's personal journey into this new world and a potential new relationship. But Linklater finds resonance in every scene, revealing truths about how we discover ourselves and others and find our own inner strengths. Cleverly, these themes emerge very subtly. Because above all, this is a comedy. And it's one of the most consistently hilarious movies of the year.

Watch the trailer for Everybody Wants Some: