A relentless onslaught of violent action, this movie is notable mainly because there's a woman at the centre of it, which means that it's entertaining even if it's rather pointless. With an Asian chop-socky style, it feels like it could have been based on a Japanese graphic novel. And with its limited one-room setting, it seems like it might be adapted from a stage play. But no, this is an original screenplay that cleverly mimics those (and more) styles. 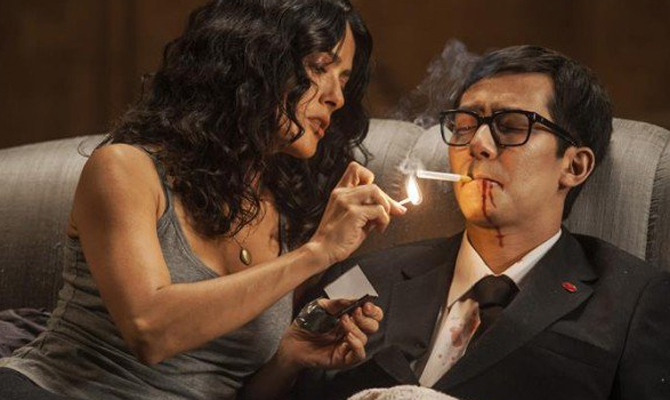 It stars Salma Hayek as Everly, a woman who has been held for four years in a single room, forced to work as a prostitute. And today she has snapped, killing her captors before realising that getting out of the building won't be quite that easy. Worried about her mother and young daughter (Laura Cepeda and Aisha Aymah), Everly tries to make a deal with the big boss Taiko (Hiroyuki Watanabe), who merely sends a series of vicious goons culminating in The Sadist (Togo Igawa). Eventually Everly's mother and daughter turn up, so now she has to try to keep them out of harm's way as well.

There are only brief respites from the carnage as this movie powers through a series of jaw-droppingly violent fight sequences that are as messy and witty as anything Tarantino has dreamed up. And the filmmakers play up the absurdity, using a soundtrack that's packed with Christmas carols as Everly dispatches one attacker after another.

Hayek goes at it full-tilt, belting out riotous one-liners while moving like some sort of super-powered sexy ninja. But this isn't a male fantasy: she's the one with all the power. And Hayek also gets to play some surprisingly warm moments along the way, especially as she interacts with Cepeda and Aymah, as well as Akie Kotabe as a man who takes a very long time to die.

Director Lynch and writer Hannon make it clear from the start that Everly knows she's unlikely to get out of here alive, and it's her tenacity that holds the interest. This is a woman exploding after years of violence at the hands of men, not out of revenge but for her own survival. Otherwise, there isn't much subtext to grab onto, and the ridiculously brutal grisliness kind of undermines most of that anyway. At least the film is directed and written in a way that brings out both the black humour and the characters' primal instincts. And it's so outrageously over-the-top that it can't help but keep us thoroughly gobsmacked.

Watch the trailer for Everly