Cleverly shot guerrilla-style in Disney's Florida and California theme parks, this offbeat thriller is an exercise in relentlessly inventive filmmaking, vividly proving that pure imagination can overcome a micro-budget. Writer-director Moore propels us into a crazed nightmarish odyssey that's disorienting in all the right ways and then surprises us with an emotional final punch. 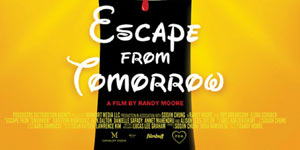 It's the last day of a family holiday in Florida, and Jim (Abramsohn) wants to make the most of it with his wife Emily (Schuber) and their energetic kids (Rodriguez and Dalton). This morning he learned that he's lost his job, and decides to keep it a secret. And now everything looks a bit wrong as he starts hallucinating scary faces where there should be smiles. He also continually notices two giggling French girls (Safady and Mahendru) who seem to be following them everywhere. And the day gets even stranger when he meets a hypnotic woman (Lees-Taylor) who's part of a prostitution ring involving the Disney princesses. Further into the rabbit hole, he has a terrifying encounter with a mad scientist (Klassen).

Filmmaker Moore expertly draws on the creepiness that already infuses Disney's too-smiley attractions to crank up the horror. And then there are the everyday terrors of theme parks: endless queuing, disappointing ride closures and the family tensions these kinds of holidays bring up. So as the day continues, Jim blurs the lines between him and the characters in the Disney fairy tales, especially the scarier elements. And Abramsohn plays it perfectly, leaving us wondering if we're watching the unravelling mind of man terrified of unemployment, a frightening parallel reality, or perhaps it's just a nasty bout of food poisoning.

All of this is strikingly shot in black and white and sharply well-edited, so it looks like Moore had full approval from Disney. Which he didn't. He uses a lot of green-screen trickery, but the effects are nearly seamless. And the way it's assembled makes the performances feel improvisational and sometimes unnervingly realistic. It also quietly builds into a Hitchcock-style thriller before transforming into something more Lynchian: surreal and seriously freaky. But what lingers in our mind is the way Moore uses the "Happiest Place on Earth" to explore a very dark emotional reality.