Molecular gastronomy is a dry topic for a fly-on-the-wall doc, as it's basically watching scientists experiment with edible chemicals for nearly two hours. And filmmaker Wetzel never explains what we're seeing, so it will help if you know something about El Bulli beforehand. 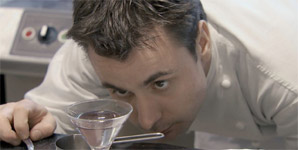 Long regarded as the world's most innovative restaurant, El Bulli is only open half of the year in an isolated Catalonia town, closing for the other six months while chef Adria and his team move to Barcelona to experiment with new recipes. The documentary opens with the team packing up the restaurant, then chemically playing around with colours, textures and flavours in their laboratory-style test kitchen. Adria and long-time collaborators Castro, Xatruch and Casanas have one simple goal: to push cuisine in new directions.

Oddly for a cooking documentary, the food isn't very appetising, although what they're doing with it is amazing. It's certainly artistically interesting, tiny portions with odd ingredients that make us wonder how they taste (it's impossible to guess). But since El Bulli is a vastly expensive restaurant in rural Spain that's impossible to get into, it's unlikely we'd ever get a chance to sample this food. Indeed, Adria closed El Bulli permanently in 2011 (he plans to reopen as a "creativity centre" in 2014).

There are moments of personality and humour along the way, such as when the chefs try to buy just five grapes in a local market. And debates about the impact of various ingredients are lively. About halfway into the film, the team returns to El Bulli for the season, which gives us a glimpse into the elaborate processes in the tightly run kitchen, in which Adria is revered with more than a little trepidation. When presented with a new dish, he's like a child who's nervous about trying a new vegetable.

Wetzel keeps the film sleek and clean, shooting mostly in close-ups of the faces of the immaculately groomed staff. There are moments when the experimentation and table service come together with bracing clarity, but mainly the film is a chance to experience an iconic moment in restaurant history as we wait for these principles to filter down to our everyday life.

Which probably won't be in our lifetime.