Dreams Of A Life

Dreams Of A Life Review

This beautifully assembled exploration of the life of a Londoner is hauntingly, desperately sad as it reveals a person so isolated that she fell through the cracks. The filmmaking is skilful and powerfully moving, even if it feels more like a TV doc than a feature film. 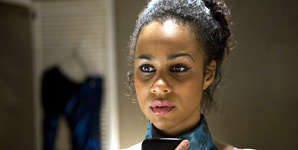 In 2006, Joyce Vincent was found dead in her North London flat with her television still on and newly wrapped Christmas presents around her. She had been dead for three years. But who was she? Why didn't her family report her missing? How could someone just disappear like that? There was no way to determine the cause of death, because the body was so badly decomposed, although the police ruled out suspicious circumstances.

Clearly there's a lot more to this story than meets the eye. To piece together a timeline, Morley interviews journalists, council employees and Joyce's friends. Morley also inventively uses actors (Ashton and Luka-Cain play her as a woman and child) to re-enact scenes from Joyce's life based on photos showing a lively, educated, sexy mix-raced woman who wasn't even 40 when she died.

The camera work is sharp and intimate, and as the film progresses, Joyce's life begins to come into focus. Watching her friends react to a recording of her voice is moving, while the re-creations show a head-turning woman who was the life of the party but was secretly lonely. She drifted in and out of peoples' lives, adapted to them, got into an abusive relationship and eventually lost touch with her friends, who just assumed that she had moved on.

Despite feeling rather padded out, the film is a powerfully evocative exploration of how easy it is to get lost in a big city and how little we actually know about friends we assume are out there having a great life.

Everyone has a past that we know very little about. Joyce certainly did, and as she moved around London over the years she always fitted in with the people she met, yet no one noticed it when she vanished. And as her story starts coming into focus, the film takes on a bluesy, sad tone that really gets under the skin.