It's extremely rare for a low-budget mock-documentary to come together as well as this scruffy little British comedy. Not only is it seamlessly made, never violating the rules of the genre, but it's genuinely hilarious and packed with terrific characters. It also has a lot to say about friendship, especially the long-held variety. 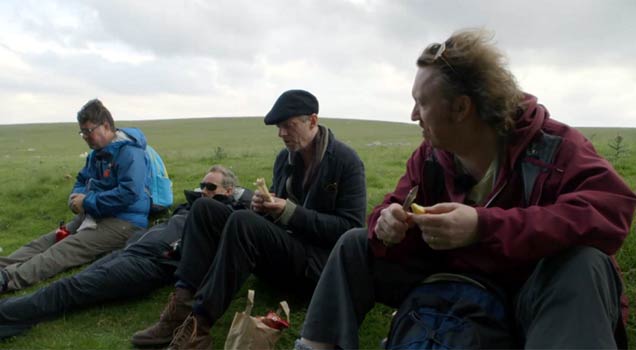 The film is set up as a video shot by 19-year-old Luke (Rupert Simonian) to document a coast-to-coast walking trip across England planned by his dad Gordon (Richard Lumsden). Along for the trip are Gordon's childhood buddies Steve and Keith (Jeremy Swift and Karl Theobold) as well as their estranged friend Julian (Ned Dennehy), a posh drunk who does whatever he wants. They set off on their 192-mile hike in Cumbria, and over the next 12 days each man reveals a personal issue: Gordon is approaching 50 with little to show for his life, Steve is simply not feeling up to the challenge, and Keith finally admits to his mates that he's gay.

Refreshingly, none of these story elements is played for melodrama. Every scene in the film feels utterly real, packed with honest humour, witty banter and glimpses of dark underlying emotions. Even the slapstick sequences feel truthful, which makes them all the funnier. It of course helps that these four actors deliver utterly grounded performances, never breaking character at all while adding telling details that reveal all kinds of things about them as individuals and as friends who have known each other for 20 years.

Director James Rouse and writer Torben Betts have crafted this film with striking skill, simply because it looks so haphazard. But movies aren'tl this truthful by accident: even though it feels improvised, there's a lot going on here. The structure is simple, as each day's events are bookended with meals in whatever pub they crash in for the night. And what these men learn about themselves and each other is startlingly resonant, demonstrating that getting through life requires a group of friends to rely on. And perhaps a bit of cheating now and then.