Films about spiritual journeys should be celebrated, as they force us to explore deeper truths about our lives, but this one veers unevenly from comedy to drama to romance as it heads for a less-than-revelatory conclusion. It's nicely shot and some of the acting is decent, but it's difficult to identify with characters we don't like very much, and in the end the film feels as pointlessly gimmicky as its title. 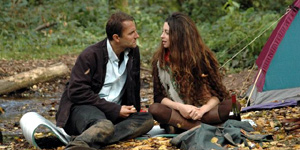 This is the story of London ad executive Callum (Hurn), whose faltering business sparks some sort of internal quest for meaning in life. It doesn't help that his current make-or-break client is a cranberry alco-pop that seems impossible to sell. His bullying colleague Marrlen (Warren) is making his life miserable, so he doesn't really hesitate when he meets the free-spirited Malika (Dray) and she invites him to go camping in her native France. Off they go on a journey into the woods, where Malika separates Callum from his mobile phone, ruins his hand-made shoes and helps him quit smoking, all before sending him deeper into What's Really Important.

Yes, this is familiar stuff, including the usual message about how our lives have become far too busy and interconnected, leaving us unable to understand ourselves anymore. We may be able to identify with this idea, but the film's simplistic, sometimes silly approach doesn't help us explore it in any meaningful way. At least it's nicely shot, with a clever use of the woodland settings, which also appear Callum's dreams of running naked through the forest to practice tai chi by a lake. By contrast, the scenes in his ad agency look tacky and garish, as his colleagues clown around and never actually come up with anything creative. No wonder the business is in trouble!

Writer-actor Hurn gives Callum a relaxed every-man presence, so we go with him on this odyssey even though we feel like his spiritual yearning is little more than lust for Malika. Dray is far too quirky to be believable, and she's also so arrogant and pushy that we wouldn't spend an hour with her, let alone follow her into the wild. And Warren is so reprehensibly thuggish that we never understand how he keeps his job. In other words, the film's cliched elements undermine its more serious themes. And by never remotely grappling with the spiritual ideas the script raises, the filmmakers leave us with nothing to think about.