There's nothing clever about this deliberately rude and vulgar comedy, but certain audiences will find it absolutely hilarious. Never afraid to head straight into the cheapest, nastiest gag, director Dan Mazar and writer John Phillips throw their odd-couple stars into a series of riotously awkward situations, usually involving nudity. And even if it's not as funny as it ought to be, at least there's some meaning to the chaos. 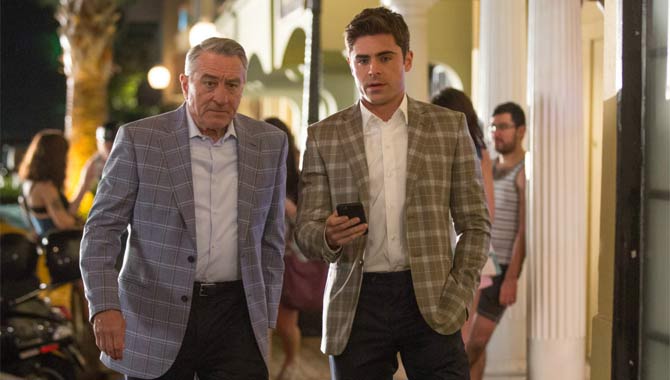 Zac Efron plays Jason, a bright young Atlanta lawyer who takes after his workaholic father (Dermot Mulroney). But Jason's grandfather Dick (Robert De Niro) remembers a more interesting Jason, before ruthless ambition took over his life. So after Grandma's funeral, Dick asks Jason to drive him down to Florida a week before Jason is due to marry the high-maintenance Meredith (Julianne Hough). Jason quickly discovers that Grandpa is intent on sowing some very wild oats, detouring their journey through Daytona at spring break, where they meet a couple of girls (Aubrey Plaza and Zoey Deutch) who are up for pretty much anything. What Jason doesn't know is that Grandpa is doing all of this to remind Jason who he really is, and to show him how to enjoy life instead of control it.

The script sometimes lays on this message rather thickly in between a series of deliberately jaw-dropping gross-out sequences. Predictably, drugs and sex abound, and most of the jokes are so corny and ludicrous that they're not remotely believable. Everything that happens strains to shock the audience, which means that nothing is actually very shocking. But while the story has no tension at all, it also manages to grab hold of the audience simply because the characters are so vividly played by the fearless Efron and De Niro. Neither role is much of a stretch, but they dive into even the yucky and/or naked moments with gusto, developing some chemistry in the process.

Annoyingly, Mazer misses the chance to inject even a hint of a blackly comical edge to the film, leaving everything feeling merely goofy. This gives the ace supporting cast little to do but try to steal their scenes (the hilarious Plaza walks off with the whole film). And it leaves even the genuinely funny scenes feeling rather pointless. Basically this is a movie for audiences who think that a penis is the most hilarious thing on earth. And they don't mind seeing a 72-year-old trying to take a 19-year-old to bed. This is certainly the kind of movie a serious film critic would never admit to laughing at. I couldn't possibly comment.

Watch the trailer for Dirty Grandpa: