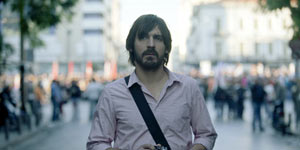 The central idea here is that we can never fully escape the sins of our parents, so as Isaac gets deeper into the story everything around him starts to feel nightmarish. Director Krawitz creates an oppressive atmosphere that holds our interest even if we're never quite sure if anything supernatural is actually happening. Perhaps it's all symbolic of the payback for European colonists who violently subjugated natives around the planet. Or maybe it's a comment on the evils of Nazi collaboration. But at least the film's ambiguity gives us plenty to think about while it creeps us out.