An odd mix of sentimental family warmth and gross-out antics, this comedy doesn't have the courage of its own convictions, which means that it's not quite funny enough to keep the audience fully entertained. That said, there are just about enough laughs that hit the target, and the big-hearted humour is surprisingly endearing, with larger themes that resonate even when the filmmakers get bogged down in the strained rude jokes.

Will Ferrell plays Brad, a guy who can't have kids but has always wanted to be a dad. So when he marries Sarah (Linda Cardellini), he enthusiastically dives into the stepdad role with her children (Owen Vaccaro and Scarlett Estevez). Then just as they're finally warming to him, their biological father Dusty (Mark Walhberg) turns up, clearly determined to win his family back. What follows is a battle between a too-nice dork and a super-cool biker, competing for the affections of both Sarah and the kids. Brad gets some terrible advice from his boss (Thomas Haden Church), while Dusty recruits a handyman (Hannibal Buress) to back his side.

There's plenty of potential in this premise, but the filmmakers refuse to make the decision about who the film is aimed at. It's too vulgar to be family entertainment, but it's not edgy enough to properly appeal to adults. So it sits there genially, occasionally sparking a burst of laughter or a knowing smile. But the plot never makes any sense, mainly because to make it work the filmmakers portray Brad as a complete and utter loser until the moment the movie needs him to be the good guy. All of which is painfully predictable, complete with shamelessly sappy moralising. Thankfully, the cast can play these kinds of characters effortlessly, and both Ferrell and Walhberg add details that keep the audience engaged.

As the story progresses through a series of gags, most of which feel deeply contrived, Ferrell carefully allows Brad to become less and less annoying, as of course he has to if the film is going to work on any level. Meanwhile, Wahlberg deploys his muscly physicality and adept comical timing to keep the other cast members on their toes. Cardellini has a feistier role than usual as the long-suffering wife, while Church and Buress drop amusingly absurd one-liners into every scene. So even if the film as a whole doesn't feel very funny, and the characters never quite develop into believable people, it's at least entertaining. And it's also sometimes easy to identify with messy characters who are struggling to define their roles within their families. 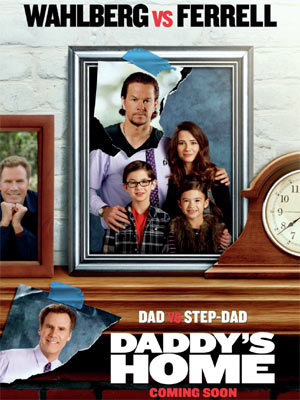