At a time when horror movies seem to only want to make the audience jump, it's great to find one that bothers to build a sense of dread. From Belgium, this is one of the nastiest horror movies in recent memory, cleverly using character detail and proper suspense to make us squirm. It's also beautifully shot in a creepy forest, with naturalistic actors in complex roles. The film is sometimes too violent and a bit unfocussed, but the dark tone makes it wonderfully unnerving. 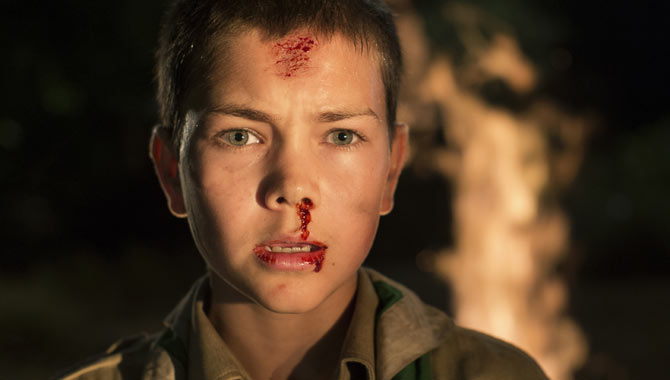 It opens as pals Peter and Kris (Stef Arts and Titus De Voogdt) prepare to lead their Cub Scout troop on a weekend camping trip in the countryside, happy that sexy fellow leader Jasmijn (Evelien Bosmans) is joining them. All three are nervous about taking the troubled boy Sam (Maurice Luijten) along, so they try to make the experience more exciting by spinning a tale about a werewolf boy living in the woods, based on a recent news report. Once at the isolated campsite, the boys immediately start bullying the sensitive Sam, while tension begins to build between the leaders. Meanwhile, Sam discovers that the feral kid (Gill Eeckelaert) is real, and he lives with a terrifying man (Jan Hammenecker) in a booby-trapped lair.

Director Jonas Govaerts and his cowriter Roel Mondelaers take their time setting all of this up, giving each of the characters plenty of personality, revealing the issues between them and offering Sam an escape through a freaky friendship with this wild child. They also pack every scene with hints of the grisliness to come, which adds a strongly humorous undertone as well as some chilling resonance. The most clever touch is the fact that the true villain is the cocky Peter, who makes Sam's life pure misery while indulging in unwelcome flirtation with Jasmijn, challenging Kris' authority and stirring discontent among the scouts. The vicious killer in the woods seems more welcoming.

All of the actors are excellent, with Luijten anchoring the film as a strong, smart kid who knows from experience how it feels to be misunderstood. Yes, he's easy to identify with, as are the leaders and other scouts. Frustratingly, Eeckelaert is never allowed to reveal much personality as the wolf-boy, while Hammenecker strains credibility as an almost supernatural monster who is evil for evil's sake alone. Otherwise, the film remains cleverly grounded in a world that's almost eerily realistic. Which helps the filmmakers find subtle ways to seriously freak out the audience.