A riveting performance from Romanian actress Luminita Gheorghiu brings this film roaringly to life, revealing layers of control within both families and society at large. And while filmmaker Netzer sometimes lays on the big themes a bit heavily, he also remembers to fill the screen with black humour and honest emotion. With this combination of intimate drama and social urgency, it's no wonder that the film won the top prize at the Berlin Film Festival. 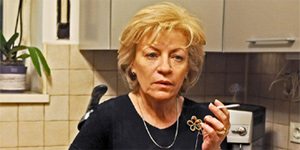 Gheorghiu plays Cornelia, a wealthy, middle-aged woman who can't resist meddling in the life of her 20-something son Barbu (Dumitrache), who she feels she's losing to his girlfriend (Goia). Then she sees her chance when he's involved in a car crash that causes the death of a teen from a poor family. A force of nature, Cornelia begins calling in favours, meddling with the police, coercing the key witness (Ivanov) and tampering with evidence to make sure Barbu isn't charged with manslaughter.

The implication is that this is how rich people get away with murder in Romania, while the title refers to Barbu's childish position as a spoiled man who wants his mummy to take care of everything. Even more interesting is the way the film portrays men as ultimately passive in the face of such a strong woman. Her husband (Zamfirescu) even refers to her as "Controlia" at one point. And Gheorghiu is simply fantastic in the role, storming into drab rooms wrapped in fur with no sympathy for anyone other than herself.

Netzer shoots this in a restless style as the camera prowls between conversations to reveal all kinds of details about the characters. Everyone in the film has depth and complexity, and even the imperious Cornelia has her moments of doubt. We can see that her only real concern is in protecting her son, as she can't bear to see him throw his life (and her reputation) away due to a moment of stupidity. So it's sometimes a little annoying when Netzer shifts his focus to the corrupt system or the huge gulf between the classes. On the other hand, these things are important on a global scale, and they're made even more relevant by the vivid characters.