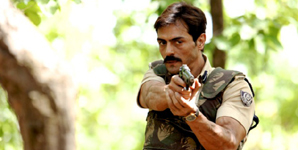 A muscular tone and non-stop action draw us into this Bollywood thriller, which then surprises us as it explores some complex themes about ethics and loyalty. That said, the film's intensity feels bombastic and melodramatic even compared to Hollywood's most overwrought blockbusters.

It's set in rural India, where militant leftist Naxalite rebels are fighting against the police and government who are helping big businesses displace villages and exploit the land. To stop the uprising, tough-guy cop Adil (Rampal) takes command of the situation, reluctantly accepting help from his oldest friend Kabir (Deol), a police academy drop-out who plans to infiltrate the Naxalites to help Adil. But as the violence escalates, Kabir begins to realise that the rebels are fighting for people's rights, and that Adil is actually taking orders from a multinational corporate boss. So the old friends square off on opposite sides of the law.

Dramas pitching brother against brother are standard Bollywood fare, and this true story is full of emotional turmoil along with action shoot-outs and massive explosions. There are also a couple of musical numbers cleverly woven into the film, giving us a break from the intense ideology and bullet-flying ambushes. There are also two women who complicate things: Adil's feisty cop wife (Gupta) and a sexy rebel (Patil) who catches Kabir's eye. So even if the filmmaking is over-the-top regarding politics, action and emotions, there's plenty to keep us entertained.

It's also a remarkably complex exploration of the terrorism issue. As Kabir begins to understand the militants' perspective, our loyalties begin to shift as well. And all of the characters are thoroughly aware of their own flaws, nicely underscored by the actors amid the corny slogan-strewn dialog and cranked-up emotions. But filmmaker Jha keeps everything moving so quickly, with bravura camera work, jagged editing and thunderous music, that we just hold on for the ride. And along the way there are plenty of things to keep us involved, right to the explosive finale.