Bold and muscular filmmaking lifts this noir-style thriller above the murky nastiness of its storyline. And even though everyone's a little too morally compromised, the cast and crew give us plenty to chew on. 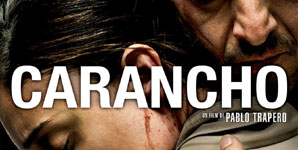 Ambulance-chasing lawyer Sosa (Darin) is desperate to stop working for a shady legal firm that's part of a conspiracy called The Foundation. This includes cops, doctors and judges who rake in as much cash as they can from insurance claims while paying the victims as little as possible. One night Sosa meets a doctor, Lujan (Gusman), who isn't part of all of this; he not only falls for her, but sees her as a way out. If only he can keep from entangling her in his messy life. Fat chance.

Filmmaker Trapero captures this story with rich colours, deep shadows and intriguing perspectives. Reflections figure heavily in the visual style of the film, which of course echoes the moral maze these characters have entered.

Although it's not easy to sympathise with people who so willingly bend the rules and risk their necks, we can see that they are at least trying to do the right thing in the bigger picture. And that the whole system is rotten to the core.

Darin and Gusman make a strong couple; even though they seem like an odd mix, there's a believable warmth to their interaction that's extremely refreshing in a film that's otherwise so dark and often brutally violent. Sometimes it feels like their story is playing out like a twisted romantic comedy, as events push them together and then pull them apart. And the thugs that are lined up to beat Sosa every time he turns around are genuinely scary because they're mainly lawyers and cops.

In the end, the film is perhaps a bit too grim to really grow on us, probably because there isn't much to it beyond the bleak portrayal of Argentine society.

The personal story at the centre is the most involving thing about the movie, and it almost gets lost in the carefully plotted series of events. But it's expertly assembled in such a way that it really sends chills up our spines. And the final sequence is genuinely shocking, uncompromising cinema.