Jennifer Aniston delivers an Oscar-calibre performance in this rather over-worked drama, which tries to emphasise heavy-handed metaphors more than the characters themselves. But it's an involving personal odyssey thanks to Aniston's honest acting, and Daniel Barnz's sensitive direction manages to dodge most of the script's more glaring pitfalls. 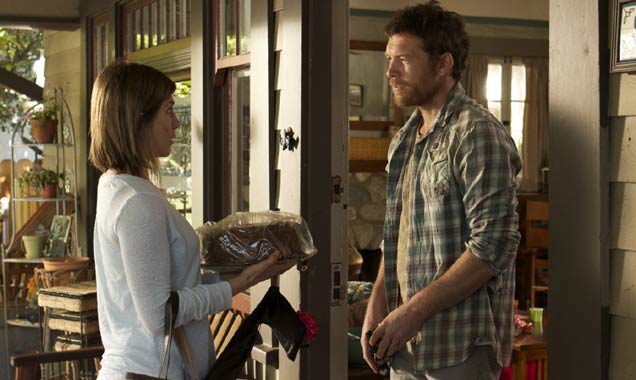 Aniston plays Claire, a woman who has been in continual pain, both emotional and physical, following the car accident that claimed the life of her young son. Revelling in her bitter sarcasm, she has alienated her husband (Chris Messina), driven her physiotherapist (Mamie Gummer) to despair and so enraged her therapy leader (Felicity Huffman) that she's been thrown out of the group. The only person who patiently sticks by her side is her maid/assistant Silvana (Adriana Barazza), and she's beginning to waver. Then Nina (Anna Kendrick), a therapy-group member, commits suicide, making Claire question why she's still bothering to be alive. There has to be a spark of hope there, and she decides to stalk Nina's single-dad widower Roy (Sam Worthington) for answers.

While the premise seems to set up the usual story about two damaged souls healing each other, the story thankfully doesn't go down that tired route. Instead, Patrick Tobin's script keeps the interaction prickly and unexpected, even as it layers in so much symbolism that it becomes rather exhausting. Claire's physical scarring is clearly indicative of something deeper, as is her array of cruel defence mechanisms. Thankfully, Aniston plays these scenes with a mixture of black comedy and aching sadness that makes the character thoroughly involving and only slightly likeable. Her interaction with Barraza is the heart of the film, beautifully played because their connection remains mainly unspoken. By contrast, Worthington feels almost superfluous; he sharply matches Aniston's cynicism, but is too nice to register very strongly.

Even less effective are the dream/fantasy sequences involving Kendrick, which feel pushy and far too obvious. Kendrick plays these moments cleverly, but since she's just an idea of a character, everything she says has already been stated more subtly in other scenes. Through all of this, Barnz does his best to diffuse the script's pushier elements (the eponymous cake scenes are mercifully elusive). He also refreshingly refuses to fill in every corner of the script, leaving tantalizing trails for us to follow in our own minds, which draws us into the film and makes its themes more resonant. So in the end, Claire's journey may actually give hope to people who feel like their lives have been torn away from them by one fateful moment.