As it's been 12 years since the last Bridget Jones movie, expectations aren't too high for this sequel. So it's a very nice surprise that this film stands on its own as a charming and often very funny romantic comedy while rounding off the trilogy in style. The cast is terrific, and the script bristles with snappy dialogue and witty characters that lead the audience down an unpredictable route to a complicated happy ending.

On her 43rd birthday, Bridget (Renee Zellweger) is finally content with her single life. Although her romantic past continues to torment her, especially when she runs into former flame Mark Darcy (Colin Firth) at a funeral. With a corporate shake-up underway at the TV news programme she produces, presenter Miranda (Sara Solemani) suggests that Bridget needs some sex to liven up her life, whisking her off to a music festival. There she has a cute, hot encounter with the dishy Jack (Patrick Dempsey). And a week later, she rekindles her romance with Mark when she learns that his marriage has ended. So when she discovers that she's pregnant, Bridget hasn't a clue which man is the father.

This premise offers plenty of scope for both thematic meaning and awkward plot turns, and the screenplay merrily dives right into all of it, mixing some silly slapstick with darker emotions as director Sharon Maguire maintains a breezy-comical tone. This kind of balance is difficult to get right, but the film feels effortlessly engaging.

Looking great and beautifully showing her age, Zellweger is excellent as Bridget. She perfectly nails the messy mix of emotions and embarrassment in every scene. Dempsey and Firth are charming and almost too good to be true, and it's nice that the script never vilifies one of them (although a preference does emerge). And scenes are peppered with terrific side roles. Thompson nearly steals the show as Bridget's dryly sarcastic doctor, while Jim Broadbent and Gemma Jones have a lot of fun as her busy parents. There's also a hilarious cameo from Ed Sheeran.

Amid the buoyant goofiness, there are nicely resonant ideas woven into the fabric of the story. Issues of age and ambition, parenthood and legacy, loyalty and competitiveness add meaning to the personal comedy and drama. And a gentle jab at the pandering nature of new media adds some topicality ("Cut to the Hitler cats!"). In other words, the cast and crew could have easily just recycled the same old jokes, but they've skilfully pushed Bridget into a new stage of her life while keeping her as clumsily likeable as ever. 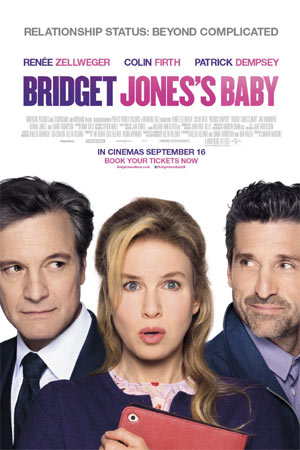