Steven Spielberg takes on the Cold War with a stately, sentimental thriller that gurgles along with quiet intensity, only occasionally finding a real spark of energy. Most intriguing, and important, is the way the film refuses to indulge in the usual moralising, allowing its characters to be complex and confused as they try to do the right thing. Even the Russians are depicted as real people rather than shady villains. And this makes what happens utterly riveting. 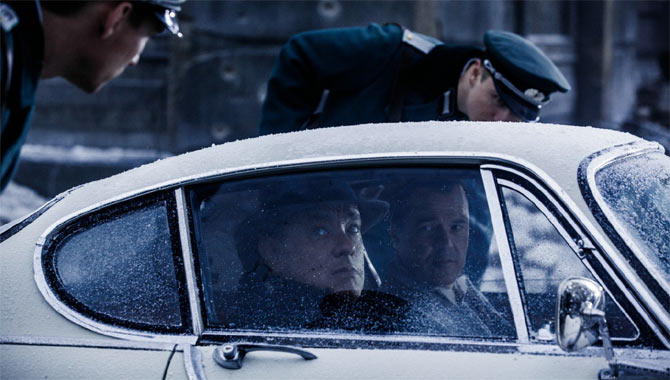 Set in 1957 New York, the story centres on lawyer James Donovan (Tom Hanks), who is hired to represent Rudolf Abel (Mark Rylance) as he is tried for being a Soviet spy. But James is fighting a losing battle against a culture that's determined to convict Rudolf, regardless of the evidence against him. Three years later, an American U-2 spy plane is shot down over Russia, and its pilot Gary Powers (Austin Stowell) captured. So now James is drafted in by the CIA to negotiate a swap: Rudolf for Gary. He heads to Berlin to orchestrate the hand-off, and there decides that he also wants the East Germans to free an American student (Will Rogers) who was wrongfully detained as the Berlin Wall was being built.

Donovan was a remarkable man who tirelessly went far beyond the call in everything he did. He's also a terrific movie character, and Hanks plays him with deadpan honesty, adding shadings to every scenes that make him easy to identify with. This is a likeable person who represents today's political ideal: a tenacious man who ignores partisan politics to do the right thing. The characters around him are less developed, although Rylance offers some strong support as an honest, perceptive man who accepts his fate with dignity. And Ryan has some pointed moments as Donovan's observant wife. All of the actors benefit from the strong screenplay by Joel and Ethan Coen and Matt Charman, which stirs plenty of edgy humour into the Cold War tensions.

As always, Spielberg tells the story with skill and elegance, using every aspect of filmmaking to bring the themes home. Some elements are a bit overstated, such as production design that depicts 1950s America as warm and comfortable while Berlin is an icy, dark nightmare. But the issues the film grapples with are hugely resonant today, mainly in the depiction of the clash between Eastern and Western styles of security and government. Spielberg depicts the Cold War without indulging in its paranoid attitudes, which offers a clear message to our own troubled times and perhaps will also help to heal some old wounds.

Watch the trailer for Bridge Of Spies here: