It's been 17 years since The Blair Witch Project shook up the cinema and created the found-footage craze. Since then, filmmakers have tried pretty much every variation on the approach, with only a few properly great movies along the way (Cloverfield, Chronicle, REC). Now a new group of filmmakers have taken on the original with this sequel, which immediately starts violating the rules of the genre using editing, impossible camera angles, a complex sound mix and even a background score. As a result, it's better than most shaky-cam films, including the original. 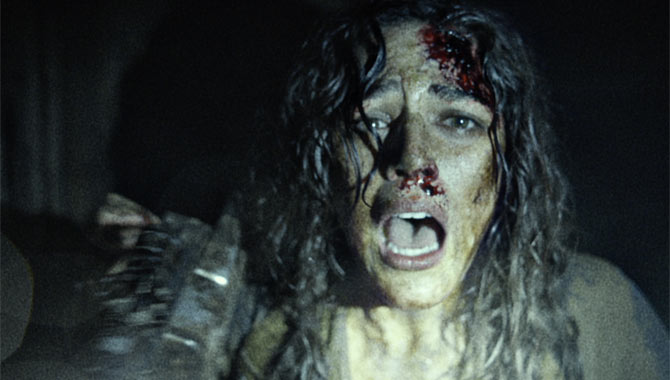 The connection is James (James Allen McCune), whose sister was the central figure in the original collection of tapes found in the woods where the town of Blair once stood. Now at university, he decides to investigate her disappearance, enlisting his film-school friend Lisa (Callie Hernandez) to document his search. Accompanied by his best pal Peter (Brandon Scott) and Peter's girlfriend Ashley (Corbin Reid), they head into the creepy forest, with local redneck meth-heads Lane and Talia (Wes Robinson and Valorie Curry) as their guides. Of course, they instantly get lost, and freaky things start happening as time and space seem to bend.

Because this is actually a proper film and not, as claimed, a collection of random video snippets, it has a lot more focus than the original movie. There's a carefully structured plot, characters with some sense of history and an escalation of the horror as the supernatural menace grows. On the other hand, everything that happens feels utterly pointless, an empty exercise in making the audience jump using loud noises rather than anything truly frightening. But sometimes that's all you want from a movie like this.

The actors have little to do but get increasingly hysterical. But the earlier scenes have a cool naturalism in their drunken antics and snappy banter. Then when the loud sound effects kick in, there's just a lot of running and screaming, with Hernandez required to go far beyond the call. Her tunnel set-piece is the scariest scene in the film, because it plays on claustrophobia rather than fear of something unseen.

For the rest of the movie, director Adam Wingard (The Guest) merely jolts the audience with sudden crashes and growling music, plus a few glimpses of nasty figures lurking in the shadows. His most intriguing idea is to include a camera drone to get some fantastic aerial shots, although he abandons the idea quickly. Indeed, the entire film feels like an attempt to breathe life into a tired genre. It's not a great movie, but fans will love it.

Watch the trailer for Blair Witch: