While this submarine adventure starts out as a brainy thriller with superior production design, it eventually gives in to the demands of the genre: silly plotting and corny melodrama. Screenwriter Dennis Kelly never remotely tries to sell the two big events that cause considerable mayhem for everyone on-screen, so both feel sudden and contrived. At least the cast is sharp enough that the audience is willing to go with it. 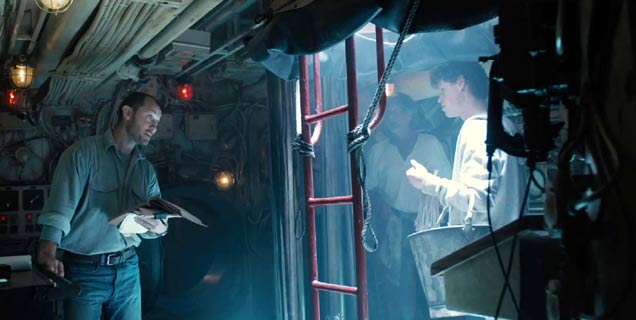 It opens in recession-gripped Scotland. After being sacked from the steelworks, Robinson (Jude Law) teams up with fellow unemployed pal Blackie (Konstantin Khabenskiy) to reclaim their dignity by salvaging Nazi gold from a sunken sub in the Black Sea. With finance arranged by Daniels (Scoot McNairy), they assemble a team of Brits and Russians who immediately start re-enacting the Cold War in the rusty Soviet-vintage submarine they'll be using for their heist. Crewmates include a psycho diver (Ben Mendelsohn), a wheezy veteran (David Threlfall) and an 18-year-old (Bobby Schofield) with nothing better to do. But as they skulk along beneath the Russian Fleet, tempers flare and threaten to undermine their mission. Getting their hands on the gold is one thing; making it home alive might be even trickier.

Director Kevin Macdonald keeps the film fast-paced and tense, as the biggest peril this crew faces is in the fiery interaction between themselves. Arguments, paranoia and mistrust lead to violence, which in turn causes a series of problems that threaten the lives of everyone on board the submarine. Frankly, this seems rather far-fetched for a team of supposedly elite mercenaries who know that they need to look out for each other if they have any hope of accomplishing the mission. And with some major plot twists along the way, the story begins to feel like a collection of increasingly implausible obstacles these resourceful men need to overcome.

At least the actors are all up to the challenge. Law is edgy and charismatic as the team leader trying to calm down the bickering crew. The standouts are the panicky McNairy, perplexed Schofield, mad-eyed Mendelsohn and calm-cool Dobrygin. The rest kind of become interchangeable, like fodder in a slasher-stalker horror movie. And Whittaker's inclusion as Robinson's wife in dreamy flashbacks feels like a desperate attempt to inject some oestrogen into the proceedings. In other words, while the film has a driving sense of energy, some terrific set-pieces and a wonderfully claustrophobic clanky-sub set, all deployed with skill by Macdonald and his cast, the script is so porous that it ultimately sinks the movie.