It's fairly obvious that the cast and crew began making this film with only the thinnest outline of a plot and characters, because the story feels like it was made up as they went along. The actors do a great job bringing out the absurd humour in their roles, but without a narrative to hold it together, the movie feels aimless. 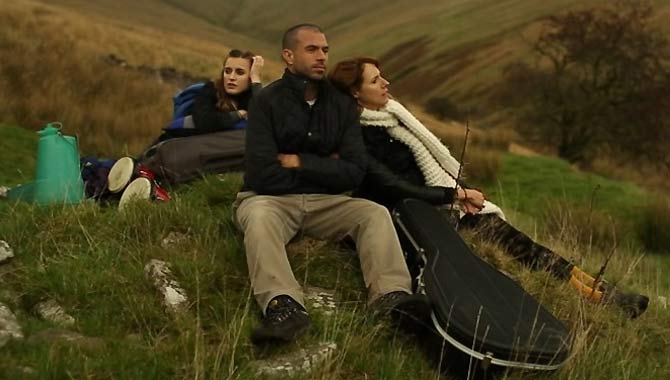 It's set in rural Wales, where sisters Lisa and Claire (Sightseers' Alice Lowe and Doll & Em's Dolly Wells) steal a car belonging to a pair of poets and assume their identities so they can hide out at a beat poetry retreat. Lisa is desperate to find a man, and she locks onto the sexy Richard (Downton Abbey's Tom Cullen), a nice but very dim guy whose high-maintenance girlfriend Louise (Rosa Robson) arrives a bit later. The organisers Gareth and Stacey (Richard Elis and Laura Patch) take this small gang on a three-day hiking trip, during which their task is to write a poem for a competition. But everyone is more interested in making sure they're the centre of attention.

There are some great gags along the way, and some wonderfully awkward interaction as these people engage in a farcical amount of flirting and jealousy. Most of it rings false (why would the shark-like Louise fall for the dopey Richard?), but at least it gives the audience something to pay attention to as these goofy people roam around the countryside. Although since it's so freeform, it has no sense of momentum. Lowe and Wells are particularly good at creating characters like this on the fly, hinting at their deeper hopes and yearnings. And Cullen is genuinely adorable. But it's difficult to care what happens to any of these people. And the laughs are a bit too sparse to keep the viewers chuckling.

The film is nicely shot in lovely locations, with expansive scenery and some clever moments in which the characters are forced together even in the wide open country. But the implausibility of it all gnaws away at the film, from the unlikely £11,000 pot of cash for the competition winner (with six entrants?) to the final sequence in which several dangling plot threads suddenly come together for absolutely no reason. And most of the big emotional moments strain for but never quite locate the resonance. Thankfully, the actors are likeable enough to make the film watchable. Even if the characters they come up with aren't likeable at all.