Tim Burton combines his sunnier filmmaking style (Big Fish) with his more deranged impulses (Dark Shadows) for this amazing true story about both the nature of art and how easy it is to slip into an unhealthy relationship. This is the true story of Margaret Keane, the painter responsible for those huge-eyed waifs that peered eerily from virtually everyone's wall in the 1960s and 70s. It's funny and shocking, and best of all deeply moving. 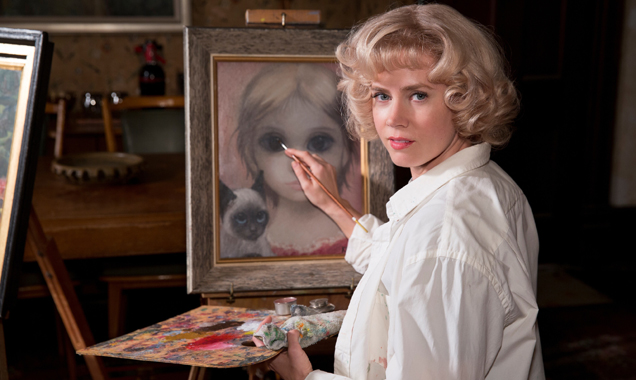 The film opens in 1958 as Margaret (Amy Adams) is fleeing with her daughter Jane (Raye, then Arthur) from an abusive marriage. She settles in San Francisco, and as she begins to establish herself as a local painter she meets fellow painter Walter Keane (Christoph Waltz), a fast-talking charmer who not only discovers that Margaret's paintings have an audience, but he takes credit for painting them himself. At first it's a case of mistaken identity, then it becomes a commercial issue. But as Walter innovates with printed posters and postcards, creating a whole industry around the mournful images, he begins to live the high life, hanging out with movie stars and world leaders while Margaret is locked in her studio at home painting to meet the demand. After he threatens her with legal ramifications and physical violence if she tells anyone the truth, Margaret finally snaps.

Burton keeps Adams at the centre of the film, drawing out her feisty personality and deep artistic sensibilities while letting Waltz become an almost cartoonish villain whirling around her. It's a clever trick, because it forces the film's central question about whether Margaret's paintings are indeed art (Terence Stamp's snooty New York art critic definitely thinks not), even as her artistic integrity is never in doubt. Adams is terrific in the role, especially since Burton focusses on her expressive eyes to draw the audience in. By comparison, Waltz is rather over-the-top, but he keeps adding subtle shades to Walter's manic bravura, and he makes the climactic courtroom sequence hilariously ridiculous.

Not only is this story jaw-droppingly outrageous, but it combines a warped comical sensibility with deeper issues about relationships and art. Screenwriters Scott Alexander and Larry Karaszewski have also written fiendishly clever biopics about Andy Kaufman (1999's Man on the Moon), Larry Flynt (1996's The People vs Larry Flynt) and notorious filmmaker Ed Wood (Burton's 1994 classic), and in Margaret Keane they find a subject who is even more emotionally resonant, a dedicated artist creating wildly popular paintings many people refuse to label as art. By telling her story in such a deeply personal way, the film might give hope to people who have let themselves fall into a dodgy situation.