After 2013's beefy Man of Steel, director Zack Snyder goes even bigger and darker with this sequel, cross-pollenating Clark Kent's story with flashbacks to the origins of Bruce Wayne and his Dark Knight alter-ego. The problem is that the film is so big and loud that it can't help but feel bloated, especially since so much of what's on screen feels rather vacuous. But it looks amazing and is relentlessly gripping. 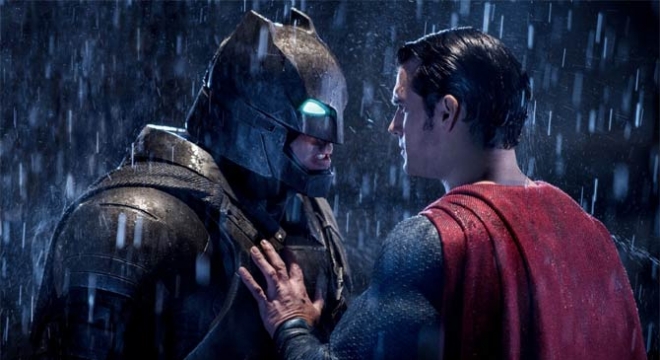 After a Bat-origin prologue, the story kicks off with the climactic battle from Man of Steel as seen from the perspective of Bruce Wayne (Ben Affleck), watching his city being destroyed by Superman (Henry Cavill). This further fuels the rage that began when his parents were murdered. And that fire is stoked by the mischievous millionaire Lex Luthor (Jesse Eisenberg). Meanwhile, Superman/Clark is struggling with how the world is revering him as a god, which is straining his relationship with intrepid reporter Lois (Amy Adams). As these very different vigilante heros head toward a climactic confrontation, Luthor is up to something seriously nefarious. And the ensuing chaos brings another hero into the open, Wonder Woman Diana Prince (Gal Gadot).

While the various plot threads are fascinating, and Snyder maintains a snappy pace, the overall story centres on the fact that Affleck's prickly, bitter Bruce is easily manipulated into doing terrible things, which makes him rather unlikeable. And Cavill's fundamentally good Clark isn't much easier to identify with. Both are also oddly constrained by their costumes and bulked-up physicalities, which leave them unable to move properly. This allows the side characters to steal the show: Adams adds emotion and passion, Eisenberg provides the nutty nastiness, Irons is hilariously cynical as Bruce's butler Alfred, and Fishburne is all bluster as Lois' editor. But in the end, the film belongs to the gorgeous, clear-headed Gadot, instantly making her stand-alone movie the most anticipated superhero project on the horizon.

Snyder gives this film such a massive scale that fans get plenty of bang for their buck. But while it looks amazing and feels hugely emotional, it's difficult not to notice the problems. All of the dream sequences are utterly unnecessary (especially when Bruce bases his entire quest for vengeance on a dream in which he's in a Mad Max-style desert dystopia). And there's also the issue that much of the gadgetry seems to have been created by a 10-year-old boy, which actually makes it boring (like the indestructible Batmobile). It may look achingly cool, and there's never a dull moment, but in the end it's so brutally violent and full of itself that it leaves us gasping for fresh air.