It's easy to see this comical romp as Bridesmaids meets The Hangover, but there's a bit more to it than that. It's a genuinely silly film with a rather simple plot, as three women try to accomplish something urgent while impaired by alcohol, drugs and romance. But it's goofy enough to keep us laughing. 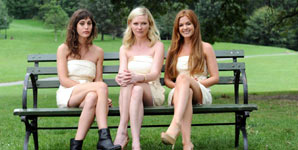 The trio in question are Dunst, Fisher and Caplan, high school friends who reunite in New York as bridesmaids for Becky (a cleverly against-type Wilson), a girl none of them ever really liked. On the night before the marriage, they're goofing around with Becky's rather large wedding dress, and they tear it. So now they have one long night to get it repaired. Along the way, they run into the stag night for Becky's groom (MacArthur) and his chucklehead friends (Scott, Marsden and Bornheimer).

Writer-director Headland based this film on her play, which is obvious in the rather convenient plotting. Because there's a man for each of the bridesmaids, the film has three romantic-comedy plots to run alongside the central story, and each one is rather predictable. But the theatrical origin also means that the characters are quite well-defined, giving each a specific journey. Dunst's character is irritated that Becky is getting married before she is, and sees the charming Marsden as spoils of war; Fisher's is so self-involved that she barely notices that there's a wedding going on or that nice guy Bornheimer has always liked her; and Caplan's is terrified about revisiting her unresolved feelings toward her teen boyfriend Scott.

But Headland never gets too deep. She keeps things wild and rude, with drunken antics, cynical dialog and a series of messy mini-adventures. All of the slapstick makes it feel nonsensical, but it's grounded in likeable characters we can root for. And by the end, it's difficult not to notice that this is exactly what a Sex and the City movie should have been. Because this has more humour and heart than either of those films had.