Shot in grainy back and white like an Italian neo-realist classic, this warm and witty ode to cinema may only appeal to true film fans. But it's packed with astute observations and enjoyably scruffy characters whose passion for movies is a natural to them as breathing. 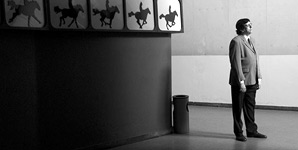 Jorge (the actors use their own names) and Manuel are programming the arthouse Cinemateca in Montevideo from an extensive archive of old prints. But running this cinema is difficult in the digital age, with shrinking audiences and failing equipment. And when the financial backers pull the plug, Jorge hasn't a clue what to do next. Having worked at Cinemateca for 25 years, he has no other skills. How can he now ask university professor Paola out on a date? Maybe his love of old movies will provide some inspiration.

Realistically tatty settings provide a terrific backdrop for this film's bone-dry humour, which knowingly observes the way audiences for serious cinema are inexorably shrinking. And then there's the bigger picture, looking at how economic forces change familiar ways of doing things. In today's financial climate, it's not only art cinemas that are closing, but also libraries, newspapers, family-run shops, traditional cafes. In other words, this is a knowing look at how society's history and experience are quietly being lost.

So it's sad to watch Jorge and Manual desperately try to draw in people who are increasingly disinterested in the classics. Indeed, this film's subtle and sly approach will alienate blockbuster lovers who prefer simplistic plotting and whizzy visuals. Director Veiroj shoots in a static fly-on-the-wall style, refusing to manipulate scenes and letting the characters emerge from actors who don't seem to be acting at all.

But every scene has a playful touch that's even more fun for audiences who know their film history. After the heartbreaking images of the cinema being closed, Jorge emerges into a contemporary landscape of computers and mobile phones, things he's clearly never touched. But he also quietly realises that his love of movies might provide a way forward. And the film's final scenes are a joyous proclamation of just why film history is more important now than it's ever been before.