Hopes were high that this film might finally crack the curse of movies based on videogames. There may have been some hits (like Tomb Raider or the Resident Evil franchise), but none has ever been critically acclaimed. So perhaps reuniting the cast and director of 2015's Macbeth might finally break the cycle. But while there's plenty of whizzy stuntwork, this film never finds a story or characters to grab hold of the audience. 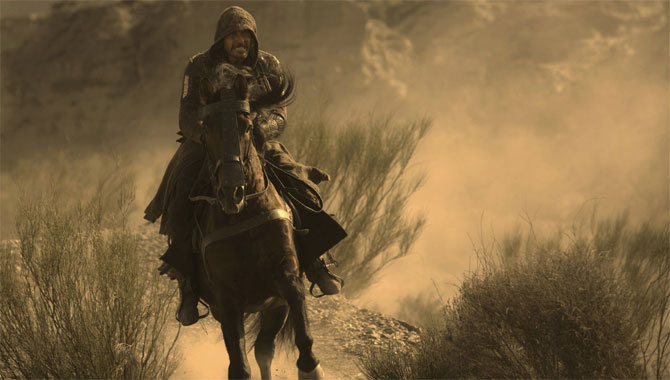 In present-day Texas, death row prisoner Cal (Michael Fassbender) is executed by lethal injection and wakes up in a gloomy fortress towering over Madrid. He's been saved by shady businessman Rikkin (Jeremy Irons), whose daughter Sofia (Marion Cotillard) is a scientist experimenting with DNA memory. Rikkin needs Cal to travel back into his own history using a mechanical contraption called an Animus to find out where his 15th century ancestor Aguilar (also Fassbender) hid the Apple of Eden, which holds the key to controlling human will. But Cal discovers that he is the last in a long line of Assassins who have sworn to protect the apple from Knights Templar like Rikkin or his imperious supreme leader Ellen (the fabulously gloomy Charlotte Rampling).

The idea is a clever one, and director Justin Kurzel keeps the visuals grounded with action that feels earthy and real rather than digitally manipulated. Indeed, the combination of sleek sci-fi thrills with medieval fantasy horror is very cool. But there's one huge problem with the premise: all of the big fight sequences and eye-catching parkour acrobatics take place in distant history. Cal can experience these things, but he can't actually do anything, so there's no peril involved. Instead, we get endless explanations of the technology and historical inter-connections, which never quite make sense regardless of how much the characters talk about them.

The only way to enjoy this film is to admire the way it looks and ignore the plot. The actors are all hugely watchable, injecting glimpses of humour and emotion into their somewhat simplistic roles. Fassbender has enough charisma to hold the movie together, and standouts among the supporting cast include Brendan Gleeson as his shellshocked dad and the electric Michael K. Williams as another captured Assassin. But none of the characters is even remotely sympathetic: they're all morally dubious killers. So this ends up being a movie about picturesque settings and macho posturing through action set-pieces that you watch without ever experiencing them. In other words, the filmmakers were trying to please gamers more than moviegoers. Perhaps it's impossible do both.

Watch the trailer for Assassin's Creed: