But as soon as you start to feel that the band are opening up and revealing themselves, it's once again replaced with experimental footage, jump cuts, and jarring noises. There's a very noticeable, and very odd, absence of all of the other band members. Will Butler appears fleetingly at the start, but aside from footage of live performances and some recording sessions, the rest of the band aren't interviewed at all. It's natural that Win and Régine take the limelight, but the lack of the rest of the band is almost a little awkward. You feel yourself thinking half way through, "Are they actually going to show any of the others?" They don't, and it's a little strange.

The film does, however, collate an astonishing amount of footage from recording studios and live performances. The band really come to life on stage and their energy is compelling. You can feel the passion pouring out of the screen as they perform 'Reflektor' to huge audiences across the world. The footage filmed in Haiti perfectly captures the carnival spirit that engulfed the band on this album; it's beautiful to watch, and again, offers a glimpse into the musicians' minds.

Overall, there's a tonne of style poured into the film, but hardly any substance. Nothing is revealed about the relationships within the band, except for fleeting footage of Win and Régine together. From watching this, you'd think they were the only constant members of the band. While you were never going to have talking heads of them discussing life on the road and difficulties faced in making an album, you wish that they could've spoken more freely and more openly about themselves as a group, rather than singular people. It's still a must-see for fans, due largely to the sheer amount of new footage on offer. In reality, this should have been an extra on a DVD, rather than the main event.

Watch the trailer for 'Arcade Fire: The Reflektor Tapes' here: 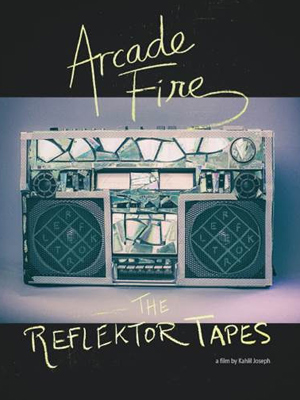