A solid cast bodes well for this unnecessary remake of the 1982 movie (based on the 1970s musical), but the filmmakers' decision to turn the catchy songs into bland pop numbers is the real mistake. It leaves the entire film feeling empty, highlighting director Will Gluck's clunky direction, which includes coaxing Cameron Diaz to a squirm-inducingly over-the-top performance. Young children probably won't mind, but as the movie lurches awkwardly from one messy set piece to the next, the lack of a decently arranged musical number makes everything look dull and witless. 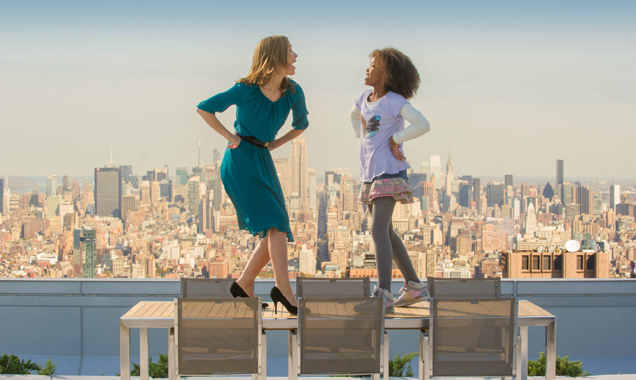 In Harlem, 10-year-old Annie (Quvenzhane Wallis) is an orphan living in a foster home with four other girls, run by the greedy Miss Hannigan (Diaz). Smart and quick-witted, Annie longs for a day when she can be reunited with her parents. Then she has a run-in with Will Stacks (Jamie Foxx), a workaholic mobile phone executive who's running for New York mayor. Will's advisor Guy (Bobby Cannavale) suggests that he take Annie in temporarily to boost his poll numbers, and once settled in his spacious penthouse apartment she immediately charms Will's assistant Grace (Rose Byrne) and driver Nash (Adewale Akinnuoye-Agbaje). And she begins to work her way into Will's heart as well.

From here, Gluck completely misses the point of the play, trying desperately to crank up a ridiculous scam subplot into some big final-act action mayhem. But this never gains any traction at all because it's clear what has to happen in the story. Indeed, the best thing on screen is the strong chemistry between Foxx and Wallis, who find moments of genuine humour and connection even in the silliest slapstick. And they seem almost reluctant every time they have to dive into yet another insipidly revamped song. Pop star Sia worked on them, but loses all the charm in the attempt to turn each one into a chart-topping clone. Fans of the original music will enjoy the brief riffs of the originals audible here and there, and they'll leave the cinema wanting to revisit the old numbers instead of these Frankenstein versions.

Still, there are moments of genuine wit along the way, including a random pastiche of teen supernatural franchises (starring Mila Kunis, Ashton Kutcher and Rihanna, no less). But none of the comedy is sharp enough, and none of the musical numbers snaps to life. All that's left is the genuinely involving story of these two loners - a middle-aged millionaire and a cheeky young urchin - who manage to find an unlikely friend in the other. And even as the filmmakers desperately strain to be hip and slick, this gentle story is rather enjoyable.