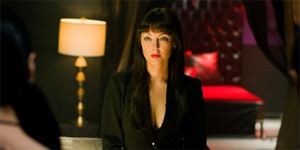 All of this makes it difficult to go with the flow, as it were. We can't identify with characters who are so thinly defined, no matter how nicely acted they are. But the Soskas are only interested in the gleaming surfaces, attractive cast members and just the vaguest hints of inner moral turmoil. Oddly, of the cast it's only Cupo, as a gangster-style pimp, who generates any emotional depth. On the other hand, just about everything about this film makes us squirm in our seats, which is an achievement all its own.