Strikingly well-assembled to tell an important, relevant, almost too-current story, this documentary holds our interest on several levels as it explores contemporary art, political activism and the situation for dissidents in China. 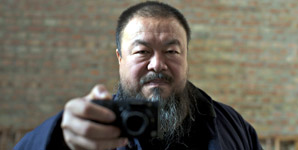 Ai Weiwei is one of China's most famous artists, with major installations around the world. As a documentary crew follows him over a few years, he travels to London, Munich and New York, and is almost always in trouble back home in Beijing due to his outspoken comments about the Chinese government.

Sure enough, in 2011 he disappeared for three months, interrogated by officials who then charged him with tax evasion and told him he could no longer use Twitter, speak to the press or leave Beijing. Well, he has managed to do one of those.

At this point (October 2011) the film ends, leaving us wondering what happened next. But then, Ai is still in the headlines, challenging authority in startling ways: smashing a priceless antique vase to protest the destruction of history, designing Beijing's iconic Bird's Nest Stadium then criticising how officials staged the Olympics, publicising 70,000 earthquake victims the government refused to acknowledge. Even his London exhibition of 100 million hand-painted sunflower seeds was a quiet protest about individuality. He describes himself as a chess player waiting for his opponent to make a move.

The film is rambling and somewhat easily distracted by long flashbacks and digressions. But it's also an observant fly-on-the-wall doc, cleverly narrated with on-screen graphics and extensive interviews with Ai and his family and friends, all of whom interject humour and energy into the film. Ai is predictably open and relaxed, and also matter-of-fact about the extraordinary twists and turns of his life, perhaps because his father was imprisoned as a dissident poet.

He calls his art social, not political, inspired by his years in New York as a student, witnessing free protest for the first time then watching the events of Tiananmen Square and the fall of Soviet Europe. "Once you experience freedom, it remains in your heart," he says, fully understanding the absurdity (and danger) of his situation without losing his optimism and curiosity. No wonder he inspires so many people. Starring: Ai Weiwei as Himself, Dan-qing Chen as Himself