A Royal Night Out

A Royal Night Out Review

Although it takes a breezy, sometimes silly approach to a fragment of a true story, this British period film has enough charm to keep audiences entertained, thanks to its lively cast and ambitious recreation of historical events. Director Julian Jarrold (Kinky Boots) may be largely fictionalising what happened to real people on VE Day 70 years ago, but he certainly knows how to have some fun at the same time. And the film has some intriguing things to say about how the world has changed since then. 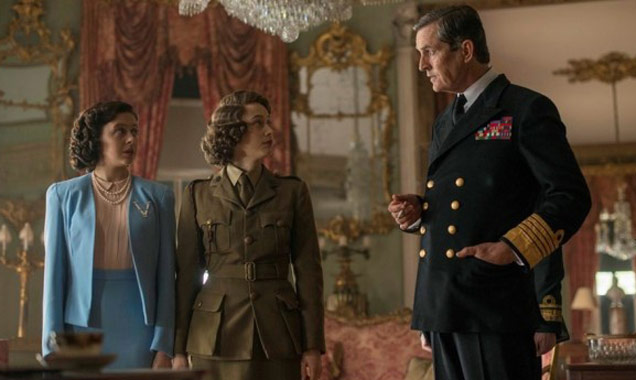 Victory in Europe was declared on May 8th 1945, and the streets of London filled with disorderly celebrations. Watching all of this from within Buckingham Palace, the teen princesses Elizabeth and Margaret (Sarah Gadon and Bel Powley) are desperate to get out there and mingle with the crowd. Their parents, King George VI and Queen Elzabeth (Rupert Everett and Emily Watson), reluctantly agree to let them leave with two military escorts (Jack Laskey and Jack Gordon). But they soon lose their chaperones in the party atmosphere in The Ritz. The ditzy Margaret heads off into the night visiting a string of parties, while Elizabeth tries to track her down, assisted by a helpful stranger, airman Jack (Jack Reynor), an anti-royalist who has no idea who this young woman actually is.

First of all, it's intriguing to remember that in 1945 people in the streets wouldn't have recognised the princesses, especially since they had essentially been locked out of view for the previous seven years. This is inconceivable now, as is the idea of revellers filling the streets celebrating victory in a war, because no generation since has had a war end on a remotely positive note. These kinds of themes add subtext to what is otherwise a frothy romp punctuated by moments of silly slapstick. Jarrold recreates the evening beautifully on-screen, with a real sense of the club-lined streets of Mayfair, the drug dens of Soho, the flag-waving crowds going wild in Trafalgar Square, and the bombed-out city returning to life.

Gadon is terrific as the young Elizabeth, quietly discovering her own place in history as she experiences a bit of real London life for the first time. Powley is a bit over the top as the gleefully partying Margaret (who was actually only 14 at the time but is played older). Everett and Watson bring some gravitas and dry wit to their roles, while extra spark is added by Roger Allam as a helpful mobster and Ruth Sheen as Jack's mum. So even if this is essentially a frothy fantasy, there's a lot to enjoy along the way. And there are even a few themes that linger afterwards.