A Pigeon Sat on a Branch Reflecting on Existence

A Pigeon Sat on a Branch Reflecting on Existence Review

This Swedish film is so bizarre that it almost defies description: is it a deadpan comedy, a satire of Swedish history or a wry exploration of how people cope with imperfection and mortality? Perhaps it's all three. Winner of Best Film at the Venice Film Festival, this riotously random movie has a variety of interwoven plot strands that never quite come together into something coherent. But every scene is so brilliantly written, directed and acted that we can't help but smile even if we're not sure why. 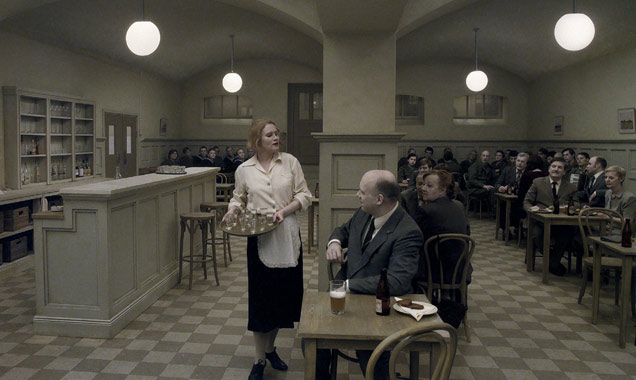 The scenes may feel haphazard, but they continually touch each other. The strongest story centres on Jonathan and Sam (Holger Andersson and Nisse Vestblom), door-to-door novelty gift salesmen who are relentlessly morose but desire to bring some fun to people's lives. On the other hand, they're under pressure to sell more to pay off their debts, which is causing tension between them. Along the way, the film also drops in on a barmaid (Charlotta Larsson) reminiscing about the atmosphere in her bar 60 years ago, a military officer (Ola Stensson) who keeps missing the important moments in his life, and a dance teacher (Lotti Tornros) who begins to stalk one of her students (Oscar Salomonsson). Then the dashing young 17th century King Charles XII (Viktor Gyllenberg) rides into a diner looking for a glass of water as his army passes by on the way to the battlefield.

The film opens with the title museum exhibit, which echoes in the way each story strand focusses on someone going through life alone but still having an impact on their surroundings. Yes, there's a rather bleak outlook on life here, repeating the idea that we are so consumed by our own lives that we can only feign interest in those around us. One character even concludes that his life has been miserable simply because he's so ungenerous and self-involved. And another ponders the morality of a life spent using people for your own pleasure.

Even so, there are flashes of Monty Python-style comedy in every scene, with all kinds of absurd, ironic encounters. Writer-director Roy Andersson also keeps everything looking strikingly original, as drab as an Ikea showroom that hasn't been cleaned in a month. And everything plays out with impeccable comic timing, keeping the audience amused even while making knowing observations about fate and death. So while it's definitely one for the arthouse crowd, it's also one of those rare movies that can make us love just how chaotic and unpredictable it is to be alive.