A difficult movie to market, this isn't actually the BFG-style fantasy adventure it looks like. Instead, it's a darkly emotional journey taken by a young boy who is grappling with huge issues he doesn't quite understand. In other words, it's a film for adults that centres on a child. It's also one of the most moving films in recent memory, with a powerful cast and a remarkably resonant sense of authenticity even in its big effects-based sequences. 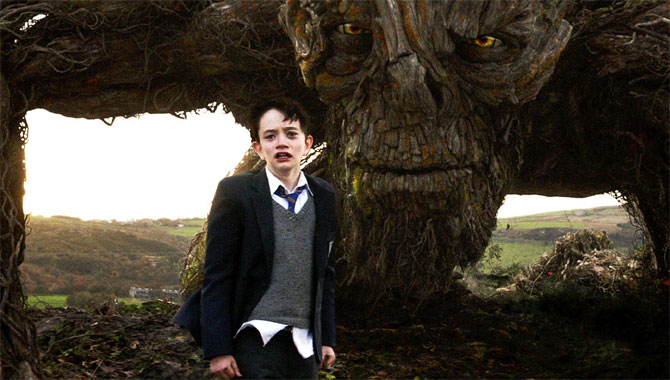 In northern England, 12-year-old Conor (newcomer Lewis MacDougall) is running his home while his mother (Felicity Jones) undergoes treatment for cancer. He's rather annoyed that his grandmother (Sigourney Weaver) keeps butting in to take over, and also that his father (Toby Kebbell) lives in America and can only drop in for short visits. Overwhelmed by all of this, Conor imagines the gigantic yew tree in a nearby churchyard coming to life and visiting him at night. This monster (voiced by Liam Neeson) spins a series of fables about princes and dragons, exploring complex themes Conor can't quite grasp because they don't have the simple morality of obvious heroes and villains. And now the monster tells Conor that he has to recount the final story himself, and that it has to be the truth.

Yes, this film is exploring the wrenching nature of mortality and grief, and how it feels to discover for the first time what it means to each of us personally. Thankfully, writer Patrick Ness (adapting his own novel) and director J.A. Bayona (The Impossible) are clever enough to make a film that will touch grown-ups and children in very different ways. The basic story works as an adventure odyssey with strong dramatic kicks. And while youngsters are caught up in the rich depth of ideas that are momentous but just out of reach, the audience members with experience in this area will find some scenes almost overwhelmingly emotional.

It helps that the film looks absolutely gorgeous, with seamless effects that are cleverly designed to use a variety of styles (the stories the monster tells are simply beautiful). And the entire cast is excellent, anchored by a star-making turn from MacDougall in a very demanding role. But what makes the film unmissable is its raw honesty, its refusal to play into other movies' sentimental handling of these themes. This is a film that acknowledges that sometimes we need to smash things up to clear the cobwebs from our minds. And it also recognises that there is real hope in confronting even the darkest truth.

Watch the trailer for A Monster Call: