Fields - Song For The Fields Video 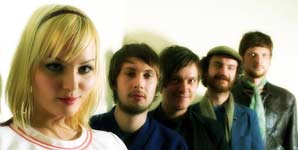 The first single by The Fields 'Song For The Fields' is released on their own label Black Lab Recordings' on March 20th as a limited edition 7" It's a heady mix of soaring west coast harmonies, pulsing electronics and a rhythm section on a runaway train to the place where The Flaming Lips raced for the prize. It's backed with "Sisters" and "A Slow Crawling Hand". It was co-produced by Rob Kirwan (Soulwax/New Order) and mixed by Steve Dub (Chemical Brothers/Clor).

Despite only being together for 5 months they have the chemistry, electricity and drinking skills of a band that have been on the road for years. Vocalist/keyboard player Thorunn hails from Iceland, where her father is a much loved composer and she has been making records since she was 11 years old. Drummer/vocalist Henry's father played at Woodstock with the Grease Band and his mother was a session singer in the 60's and 70's. Bassist/vocalist Matty was until recently holding down a day job washing the hair of the rich and semi-famous at one of London's top hair salons. Lead guitarist Jamie has a secret past as a writer with an unrequited ambition to meet (and write the biography) of Anton from Brian Jonestown Massacre.

Fields, like many great things began in a shed. It was in his garden shed in Warwickshire with a modest home studio set up that lead singer Nick Peill first sketched out the songs that would end up being the basis of Fields. While working as a primary school teacher Nick used the spare time in the school holidays to work on a catalogue of songs. It soon became obvious were these songs were getting too big for one man and his shed so in true Dick Whittington style he quit his job, packed up his shed moved to London and before long he had a band - Fields.

Combining a dark, harmony pop sensibility with the widescreen sonics to match My Bloody Valentine at their peak, Fields are already shaping up to be one of the most talked about bands of 2006. Despite the contemporary influences in Fields sound one thing running thing that tinges everything they do is folk music and a sense of the rural. The song titles, the Wickerman-esque vocal harmonies, the tapestry-like artwork and even the band's name all give a nod to the folk tradition. Fields seems to exist permanently in a world where its dusk on a summer's day and the sun is just about to go down over the village hedgerow. Albeit a village where the houses have plasma screen TV's.

Fields - Song For The Fields 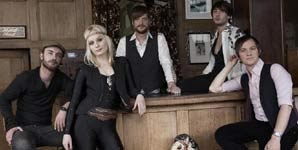 Fields - Song for the Fields

Fields - Song For The Fields Video 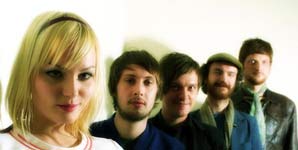