"Beat on the brat with a baseball bat", sang Joey Ramone back in 1976 and whilst not advocating violent behaviour towards others using sporting apparatus, there's little doubt Los Angeles quartet Fidlar qualify as your stereotypical brats. When not skating or hitting on girls, they're likely to be found wasted. Very wasted in fact. Indeed, the majority of the fourteen songs that make up their self-titled debut long player celebrate just that. Whether it be drinking cheap beer, scoring pills, smoking weed or snorting cocaine, there's bound to be a name check or two here. 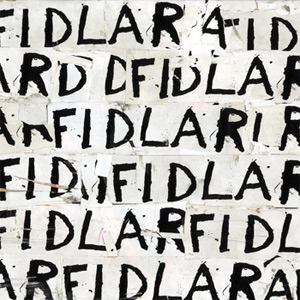 Having formed four years ago and played an endless stream of house parties, DIY shows and skate parks ever since, it was last year's excellent 'DIYDUI' EP that earned them recognition outside of their hometown. Sounding like a mash up between Black Flag, The Cramps and Wavves, Mumford & Sons they most definitely aren't. When lead singer (and guitarist) Zac Carper sings lines like, "I just wanna get really high, smoke weed until I die" on the frantically adrenaline charged 'Stoked And Broke', he means business. This, after all, is a guy who's spent time in rehab. No pretence. No posturing.

Similarly, on the poppier 'Max Can't Surf' ("I smoke weed if my baby lets me") Carper lets go over that's more Whitesnake or Guns'n'Roses than CBGBs punk. Where opener 'Cheap Beer' glorifies hedonistic excess like a long lost cousin of Queens Of The Stone Age's 'Feel Good Hit Of The Summer', '5 To 9' tells a different story. Carper extolling the virtues of having no money and therefore being unable to partake in his favourite pastime; getting high/drunk/both.

By Contributor in Music / Festivals on 02 January 2013

Brace yourselves music fans: with the BBC Sound of 2013 list now well on the way to being counted down, and a whole host of names, from the established print press to online sites and the smallest of blogs, having their own say, you’re about to be bombarded with a gluttony of new music to listen out for, to and read about. Will they all be as amazing as their respective champions claim they are? Most likely not, but part of the, uh, ‘fun’ of wading through the endless tips of the year is discovering a song or an artist that - though you’d never heard it before – will go on to provide a soundtrack for, perhaps, the rest of your life.

Here at Contactmusic we’ve attempted to pick out a mix of the names you’ll be seeing in bright lights everywhere else, interspersed with a couple of our own personal favourites who we're keeping a personal eye on over the forthcoming months...

Blogger's Delight - The names that will be everywhere

Continue reading: Keeping In Contact: Our Favourite Music Tips For 2013