Felicity Jones is set to play CHARLES DICKENS' mistress Nelly Ternan in a movie version of novel 'The Invisible Woman'. 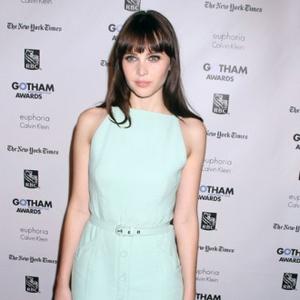 Felicity Jones is set to star opposite Ralph Fiennes in a movie about CHARLES DICKENS' mistress.

The 'Chalet Girl' actress - who worn The Breakthrough Actor of the Year prize at the Gotham Independent Film Awards in New York earlier this week - has signed on to appear in an adaptation of novel 'The Invisible Woman', about the relationship between the English author and Nelly Ternan.

The affair was secret and lasted 13 years until the day of the 'Christmas Carol' writer's death in Rochester, Kent in 1870.

Despite the relationship, he was married to Catherine Hogarth from 1835, and the pair had 10 children.

Felicity only graduated from Oxford University in 2006, but has quickly amassed a number of big roles, including the critically-acclaimed Anna in 'Like Crazy' and Lady Cordelia Flyte in 'Brideshead Revisited'.

Her forthcoming roles include 'Cheerful Weather for the Wedding' - about a young woman about to get married who realises she is making a huge mistake - and an as yet untitled project directed by Drake Doremus.