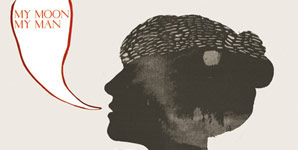 Feist
My Moon My Man
Video

Feist re-release the rich and melodic single 'My Moon My Man' as a digital release on February 11th 2008, following up the massive success of her last single '1234' (which is still being used in the latest iPod nano advert).

'My Moon My Man' was written by Feist and Gonzales (who also lent his hands to 'Let it Die', Feist's previous award-winning album). The single was produced by Feist, Gonzales and Renaud Letang, and features many talented musicians including Gonzales on piano and acetone, Mocky on the Farfisa, Jesse Baird on drums and Julian Brown on electric bass. Not one to disappoint on the visual aspect, Feist puts a new twist on the treadmill video for 'My Moon My Man', this time unveiling a brilliant choreographed routine on a moving walkway at an airport, all shot in one take.

Feist's association with the ipod ad has thrust this relatively unknown singer songwriter firmly into the limelight and has helped her latest album 'The Reminder' reach almost a million sales worldwide.

Feist - My Moon My Man