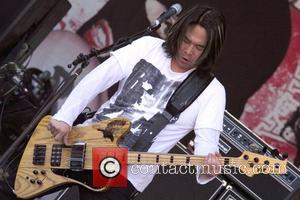 British rockers Feeder are donating all the profits from their new single Side By Side to the Japan aid appeal.
Bassist Taka Hirose, who hails from Japan, has been left horrified by the images of devastation since this month's (Mar11) 9.0-magnitude earthquake and tsunami, which killed an estimated 18,000 people.
The band's forthcoming track is being released to raise funds for the British Red Cross' Japan Tsunami appeal - and Hirose is appealing to fans to support the track, which is released on Sunday (27Mar11).
He tells Britain's The Sun, "We have all seen the devastation in Japan. Lots of people are suffering from this horrific disaster.
"Nuclear radiation fear and aftershocks are still continuing. Can you please help the people in my country by supporting this single? They and I will be so grateful."
Frontman Grant Nicholas adds, "We have incredibly close ties to Japan and have been utterly shocked and saddened by the recent events."