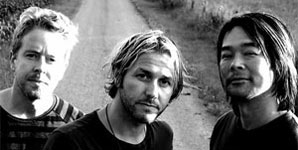 Despite being possibly the most uncool musical ensemble either side of Coldplay, there's something indiscriminately likeable about Feeder that marks them out as something of a national treasure these days. Perhaps not quite in the same way as the Manic Street Preachers granted, but over the course of their near twenty year existence they've exuded a model of consistency both on record and particularly in a live arena few have come close to matching. Having endured numerous setbacks and a topsy-turvy relationship with the media that would put Kerry Katona or Katie Price to shame, the fact they can still sell-out 1700+ capacity venues in provincial cities on a Monday night speaks volumes. Not that this is any ordinary Monday night, as Grant Nicholas duly reminds us from the outset. Whether or not St Valentine intended his loved one to be serenaded by songs with choruses like 'Drinking myself to sleep again, Night Nurse fails to ease the pain' is open to debate, but here this evening the buzz and crackle of 'Insomnia', one of the oldest compositions aired this evening, feels utterly perfect in such a setting.

Indeed its only when re-evaluating tonight's show that the realisation dawns just how many memorable and utterly fantastic songs Feeder have written throughout their lifetime. Whether it be the ode to drinking cider in their then favourite drinking establishment ('Buck Rogers') to the post-traumatic hangover of 'Just The Way I'm Feeling', each and every song they play from their extensive back catalogue is instantly recognisable. 'High' still conjures up memories of student life, 'Seven Days In The Sun' a riff heavy antidote to the traditional Eurodisco holiday anthem and even if 'Feeling A Moment' does bring to mind television advertisements for transatlantic cruises, it still stands head and shoulders above most of their peers work from the same period.

While mainly being a promotional exercise for last year's 'Renegades' long player - a third of tonight's set is lifted from the record - this evening's show and if reports from other dates on the tour are anything to go by elsewhere highlights a band at ease with their own status. In fact, while record sales and the music industry in general may be witnessing a decline, Feeder seem to have prospered. No longer under pressure to write hit singles or staples of daytime radio, they've returned to their roots on 'Renegades' and while the quality of songwriting may not quite be up to the standard of 'Swim' or 'Yesterday Went Too Soon' from their more youthful days of yore, there's an unbridled sense of enthusiasm that cannot be curbed, major label record deal or otherwise.

Such a carefree nature becomes apparent during the encore, where tempestuous ballads ('Tumble And Fall') rub shoulders with old familiar favourites ('Just A Day') while a brand new song ('Borders' - think 'Echo Park''s widescreen sheen mixed with the Pixies idolism of 'Swim') and a so-preposterous-it-works sprint through Nirvana's 'Breed' sit either side for good measure.

If anything, tonight proved to be an exercise in reassurance that Feeder still hold court as one of the most exciting live bands on these shores. Not that those of us less concerned about what the style mags say needed any re-assuring in the first place, as on this form, Feeder are simply untouchable.