Fearne Cotton Dazzles At Premiere With New Boyfriend In Tow 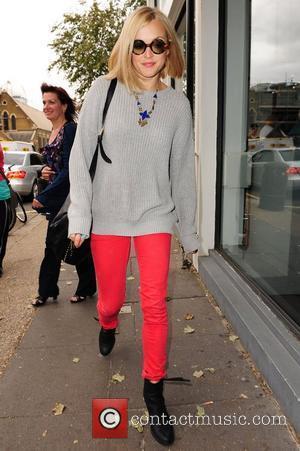 Fearne Cotton found herself more than competing against the array of legendary rock n' roll talent that turned up to the premiere of new George Harrison biopic DVD 'Living In The Material World.'
The TV presenter, who recently turned 30, arrived with new boyfriend JESSE WOOD - son of legendary ROLLING STONE member Ronnie - and looked delightful in a yellow summer dress. Her affect on Jesse has not gone unnoticed by his celebrated father, reports the Daily Mail; the 64 year-old commented "'Fearne's a beautiful girl. They're lovely together. I met her when she came to a Faces gig with Jesse at Cornbury Festival. I very much approve," going on to add "She's rock 'n' roll. I do wonder if she'll become my daughter-in-law any time soon."
The elder Wood turned up with former model Pattie Boyd, and they were just two of the stars present at a truly glittering premiere. Joining them on the red carpet were surviving Beatles members Paul McCartney and Ringo Starr - with respective partners NANCY SHEVELL and BARBARA BACH in tow - as well as former Rolling Stones bassist Bill Wyman with wife Suzanne. The late Harrison's son was also in attendance, Dhani Harrison saying in a recent interview of the Martin Scorsese-directed film, "It's really heavy for me. I already lived it, so it's like watching your life fed back to you through the eyes of Martin Scorsese, which is weirder than living it. But he did a great job."