By Andy Peterson in Music Reviews on 10 August 2010

Last time we met Hans Joachim Irmler he was providing some deft motorik touches on To Rococo Rot's Speculation album, but here he's returned into the belly of what in the kaftan era was described as an artist's collective. Faust's history extends way beyond what modern day rock stars would regard as outrageous, a chequered past that began in practically inventing krautrock up to their eventual fragmentation into two separate acts, each bearing the same name. Confused? Of course you are. 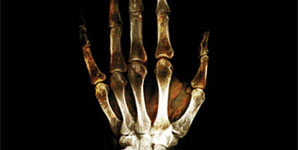 This incarnation's first release in a decade, Faust is Last is apparently the final spasm of contrarianism from the Irmler camp; recorded over three years in Spain, Austria and Germany, it's a double album of music realised from a devoutly leftfield perspective.

Despite the history, the first episode mainly stays constricted by the rigours of almost normal time signatures and structure, with works consisting either of darkly episodic instrumentals that are countered by what most people would recognise as a traditional song. The former are largely driven on without mercy by what sounds like a nine-foot snare drum, with the industrial grind of Feed The Greed and the stripped back techno throb of X-Ray proving that even after 40 years Irmler & co. can reprise the genres they helped create to fascinating effect. The latter are in the minority but no less impressively kick-ass, Hit Me culling all the urban rage of early Stooges, I Don't Buy Your Shit No More recalling Mick and Keith at their ancient best, whilst the naked piano of closer Day Out brings everything to an almost majestic close.

In many respects this conventionality (?) is almost abstract in itself given what's gone before, but a sprawling companion CD of looser, more improvised pieces serves to remind the listener of the group's roots on the very outer fringes of the avant garde. Like something being imagined by David Lynch, In But Out as an example circles the edges of what could be regarded as music, a screaming vocal just about surviving an unholy wedding with keyboards that sound like the invention of an undead Rick Wakeman. Little of the rest is any more accessible.

In many ways Faust is Last is a truly remarkable record, located totally within its own creative context, living in total rejection of the artistic status quo respected by people who care about the ideals of making music anyone else might like. Whether the fact that is the last of its kind is a cause for regret is open to debate, but the overwhelming dark spaces are moments that need to be respected as well as feared.