Review of Why Try Harder Album by Fatboy Slim 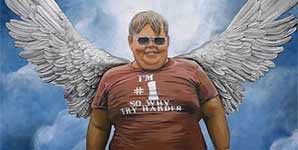 Why try harder indeed, as they say - if it ain't broken why try and fix it. Whilst Fat boy Slim aka, Norman Cook may be getting old, his classic tunes certainly aren't. The best thing about a greatest hits album is that you'll - A, know most of the tracks, and B, like pretty much all of them. This is exactly the case with 'Why Try Harder'. It's got all the old favourites on there including Right here, Right Now, Praise You and the Big Beat beauty, Santa Cruz, plus the funky new track, 'That old pair of Jeans' that demonstrates why Mr Cook is still King of the Superstar DJ's.

Even if you're not a fan of dance music, you are more than likely to know at least two Fat Boy Slim tunes but probably didn't know it was him because whilst some tracks are not originally his, they have been given the Fat Boy twist, an example being 'Brimful of Asha'. A pop song by Cornershop which originally only reached Number 60 in the charts before being given the Fat Boy Slim treatment an becoming the UK and US hit that we all know and love.

This album is the perfect accompaniment to the summer months, providing tracks for every kind of situation, lazy days on the lawn, sauntering strolls in the park, afternoon back garden barbeques, hedonistic night time dance fests and morning after mellow moments.

It has the capacity to takes you up and brings you down in just over 90 mins, all without the requirement of taking any illegal substances!

Why Try harder proves that Greatest Hits albums are made not to necessarily indicate an artists career coming to an end, but to celebrate a talent and accomplishments of their career so far.