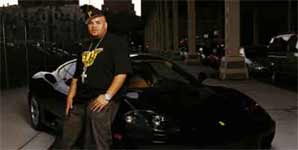 Fat Joe's new single is titled, Make It Rain & features non other than Lil' Wayne. A little more than 13 years after Fat Joe releasing his debut LP, Represent, this hip-hop legend is definitely certified as one of the last of a dying breed.

Joe's latest opus, Me, Myself and I (due November 14) not only finds him delivering his best album to date, but marks a milestone and next phase of his career. The project will be released independently on his own Terror Squad Entertainment, which is being distributed through Imperial/ EMI.

"This album sounds like Fat Joe, gutter hip-hop," he says of the project. "It'll take you back to Digging in the Crates, Jealous Ones Envy, straight street. I locked myself up in the room and said 'yo, we gonna make some hot music. I had people send me beats and said, 'yo, I'm gonna talk about what I feel, how I feel, get lyrical. I had a lot of influences whether it be some of my favorite producers, my friends. This is what I feel Fat Joe is. I love making commercial records that go pop and all that, but this is how I felt this time; straight gutter."

The video for Make It Rain was directed by Chris Robinson features a plethora of stars including: Diddy, Scott Storch, Rick Ross, DJ Khaled, Birdman, Cool & Dre and a lot of money.