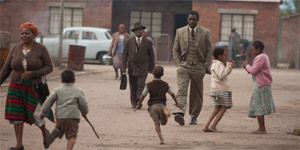 Mireille Enos, who stars as Karin Lane in 'World War Z', arrives at the New York premiere for the movie alongside her husband 'Ferris Bueller's Day' actor Alan Ruck. As she posed for photographers on the red carpet, she looked picture perfect in a floor length, Bardot necked, copper and black gown. Producer Jeremy Kleiner is also spotted at the event.