Pete Wentz has insisted Fall Out Boy have returned to music with a more mature attitude and turned into ''Fall Out Men'' following their reformation earlier this month after a three-year break. 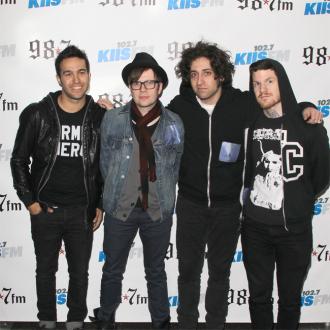 Pete Wentz says Fall Out Boy have turned into ''Fall Out Men''.

The 'Dance, Dance' hitmakers - Patrick Stump, Joe Trohman, Andy Hurley and Pete - reformed earlier this month following a three-year break and the frontman insists the band are a lot more mature this time around, even though he didn't think ''people would care'' about their reunification.

He said: ''When we got on stage in Chicago, it was crazy. It was a rush, because we honestly didn't think people would care, and that's the truth. But it felt like we didn't miss a beat.

''It's so early in the process and things are happening so much faster than we thought; the first time you do things, there's no instruction book.

''It's not like 'Oh, OK, you shouldn't act like an idiot.' We're all more appreciative and we've all grown up a bit. It's cool to do Fall Out Boy as Fall Out Men.''

Pete admitted it feels like the group - who recorded new album 'Save Rock and Roll' in secret - have had ''reunion sex'' since reforming, but they wouldn't have started making music again if one of the band members wasn't keen on the idea.

He added to MTV News: ''One of the cool things about coming back was that we decided everyone has to be in on every idea, or else it's out. We did 10 songs [for the album], maybe there will be 11 songs on there.

''We have other cool ideas, but we're definitely not in that part of being in a band where you're like 'Oh, well, this dude likes this song, so I guess we'll put it on the album, and we'll probably never play it and nobody will care about it.' ... That can happen; and so it feels so good to be so far from it. We're having the reunion sex, so like it's so awesome that we don't have to bring in the whips yet.''