Fall Out Boy celebrate their newest addition, after their guitarist Joe Trohman, has his first child; a daughter named Ruby. 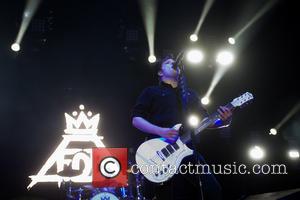 Picture: Patrick Stumpz - Fall Out Boy performing live on stage at the Phones 4u Arena as part of their Save Rock and Roll Tour 2014...

Joe Trohman, the guitarist for world renowned rock band Fall Out Boy, has become a father for the first time. Trohman and his wife, Marie Wortman Goble, have been married since 2011, and welcomed their daughter, Ruby, into the world on 25th April, 2014.

Without wanting to let this happiness and joy go unnoticed by fans, the band have released a picture on their official Twitter page, showing Trohman cradling the brand new bundle of joy, with a caption stating: "Just added a new member to the crew welcome Ruby @trohman #falloutbaby."

The news comes in a year of good news for the band, following a recent announcement from bassist Pete Wentz, when he confirmed that his girlfriend Meagan Camper is pregnant, and he is set to become a father for the second time in February, 2014.