Fall Out Boy Reunite For New Album And Tour 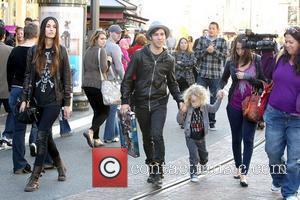 Fall Out Boy are reforming for a world tour and a new album to celebrate the 10th anniversary of their first studio record release.

The Dead on Arrival rockers have been on a hiatus since 2009, and have repeatedly denied recent speculation they are set to get back together.

Guitarist Joe Trohman even denied reunion rumours last week (27Jan13), but now they have officially confirmed they will return to the stage for a number of shows, as well as releasing a new disc in May (13).

A statement from the group reads, "When we were kids the only thing that got us through most days was music. It's why we started Fall Out Boy in the first place. This isn't a reunion because we never broke up. We needed to plug back in and make some music that matters to us. The future of Fall Out Boy starts now. Save Rock And Roll... "

The tour starts with a series of small shows, which kicks off in Chicago, Illinois on Monday (04Feb12). Concerts in bigger venues will take place from May.